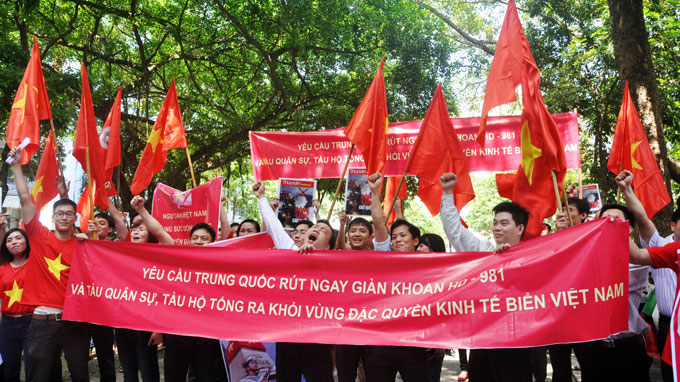 The Vietnamese Fisheries Association has confirmed that local fishermen will continue operating in the Vietnamese waters where China has illegally stationed an oil rig since May 1, despite threats from Chinese vessels that are guarding the rig.

Tran Cao Muu, general secretary of the association, made the affirmation at a gathering held by the organization in Hanoi on Wednesday to protest China’s violation of Vietnam’s sovereign right and jurisdiction over the waters where the rig is located.

The rally drew hundreds of people working in the fishery sector, university students, and residents of the capital.

The participants held national flags and banners that read “Support the Vietnamese government’s statement on its sovereignty over seas and islands,” “Unite to protect our waters!” and “Vietnamese fishermen are unanimous in protecting Vietnam’s seas and islands.”

In another similar development, about 2,000 residents, war veterans and retired civil servants in the northern city of Hai Phong also attended a rally held the same day to request that China remove its oil rig from Vietnamese waters.

The event was conducted by the Hai Phong City Lawyers Association at the Vietnam-Czech Friendship Culture House.

Among the banners were one that read: “Remove your oil rig from Vietnam’s waters now, China!"

Some of the demonstrators held an article from the May 11 edition of Tuoi Tre (Youth) newspaper with the title “Lots of love for Vietnamese waters in the East Vietnam Sea.”

The Chinese oil rig is now located at 15°29’58’’ North latitude and 111°12’06’’ East longitude in the East Vietnam Sea, within Vietnam’s exclusive economic zone and continental shelf, according to the Vietnamese Ministry of Foreign Affairs.