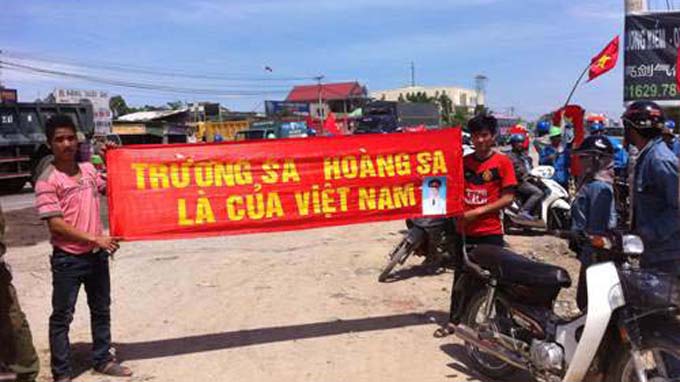 Police in the central province of Ha Tinh announced on Thursday they have arrested 76 people on suspicion of inciting and causing riots in the Vung An Economic Zone one day earlier.

At 8 am on May 14, more than 1,000 Vietnamese workers in the zone began staging marches against China’s deployment of oil rig Haiyang Shiyou 981 to Vietnamese waters.

However, violent fights erupted at 3pm the same day when the demonstrators gathered in front of one gate of Taiwanese-owned Formosa steel plant. Some aggressive persons destroyed two buses during the chaos then.

Nearly 1,000 local policemen have been dispatched to the site to restore order as well as to take injured workers to hospital for treatment.

Ho Anh Tuan, head of the management board of industrial parks in Ha Tinh, rejected reports that many employees in the economic zone have allowed their Vietnamese and Chinese workers to temporarily stop working for safety reasons. He said the economic zone will resume normal operations later today.

More than 600 rioters – including over 400 in Binh Duong, 100 in Ho Chi Minh City, and 86 in Dong Nai in the southern region - have been arrested since Tuesday for “damaging corporate assets, looting property, and even attacking police officers”, according to Vo Thanh Lap, head of the management board of industrial parks in Dong Nai.

Vietnamese government has pledged crackdown on rioters as well as instigators of riots to ensure safety for foreign-invested firms.

Meanwhile, Tran Van Nam, deputy chairman of the Binh Duong People’s Committee, asserted in an interview with Tuoi Tre on Wednesday that the Binh Duong authorities will leave no stone unturned to protect foreign investors and their assets.

He said local officials will calculate damage suffered by businesses and give financial support to those enterprises which had their properties destroyed in the recent riots.

The Binh Duong government has also called on people to keep calm, act with restraint, and not to be incited to commit illegal acts, the provincial People’s Committee said in a statement released Wednesday.