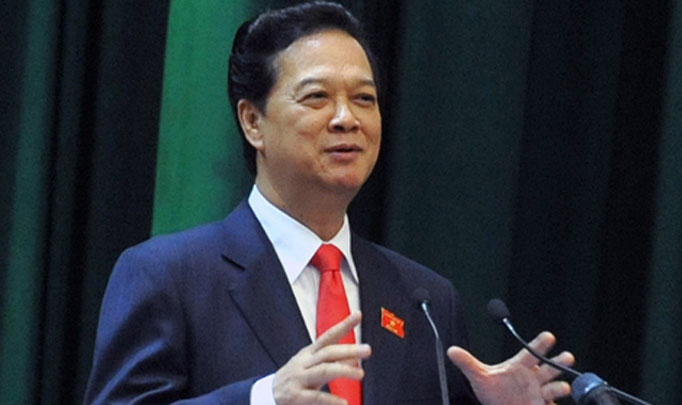 >> Live report: Vietnam holds int’l press conference on China’s illicit oil rig >> Vietnam’s Binh Duong Province vows to protect foreign investors >> Vietnam police detain over 600 rioters in southern localities The premier also required that authorities strictly punish those who have incited riots during recent peaceful marches against China’s illegal placement of oil rig Haiyang Shiyou 981 in Vietnamese waters since May 1.   In his message, PM Dung said it is legitimate that local people have expressed their patriotism and showed strong opposition to the illicit deployment of the drilling platform. But in some localities, a number of people have committed lawbreaking acts, such as smashing the property of many businesses – including foreign-invested companies – causing public disorder, and resisting on-duty law-enforcement officers. Such acts have badly affected the daily activities of people, the country’s investment environment, and the Party’s and State’s policies on external relations, the prime minister insisted in his message. Therefore, the government requests that the Ministry of Public Security, other relevant ministries, and local authorities nationwide implement the following tasks. Firstly, all concerned agencies and authorities must take effective measures to prevent any violent actions and law-breaking behaviors, severely punish offenders, protect the life and property of everyone and every business, especially foreign-owned companies, the PM said. Secondly, it is necessary to advise people not to commit law-breaking acts or follow the incitement of saboteurs and to take part in ensuring order and security, he said, adding that people should show solidarity and give support to each other in life and business activities, and contribute to the protection of the fatherland’s sovereignty in accordance with the country’s laws as well as international law. Thirdly, proper measures must be taken to help businesses that have suffered sabotage in the recent riots resume their normal operations as soon as possible. Lastly, competent agencies and authorities are required to keep foreign diplomatic agencies and international investors well informed of the Party’s and State’s consistent policy that Vietnam always does its best to ensure absolute safety for foreigners, foreign businesses, and international organizations. Many Vietnamese have peacefully marched to object to the deployment of the oil rig but some violent people have incited others to riot and sabotage corporate factories and assets in several localities in the last several days. More than 440 such violent people have been arrested in Binh Duong Province while around 186 others have been nabbed in Ho Chi Minh City and Dong Nai Province so far.