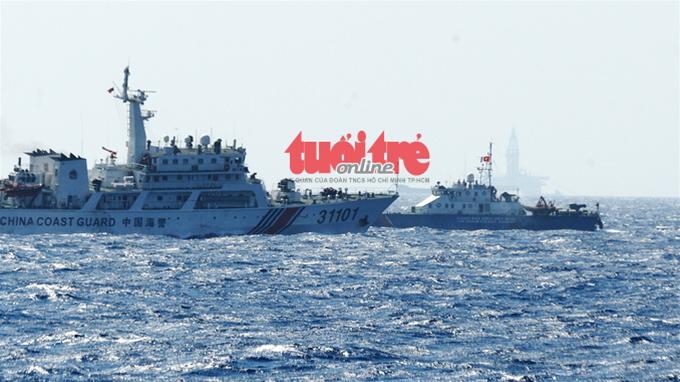 Chinese vessels that are guarding China’s oil rig Haiyang Shiyou 981 illegally planted in Vietnam’s waters posed threats to and even attempted to ram Vietnamese vessels on Wednesday, but the Vietnamese force did not waver in the face of the attacks.

The latest attacks by Chinese ships began at 7:30 am on Wednesday, when seven Chinese maritime surveillance and coast guard ships moved close to some Vietnamese fisheries surveillance ships, showing signs of provocation, in an area about seven nautical miles from the oil rig. Unlike in the confrontations in previous days, these Chinese vessels did not fire their water cannons at local ships, but they tried to make it look as if they were being attacked by the Vietnamese side, Tuoi Tre correspondents reported from the scene. Specifically, two or three Chinese ships tailed a Vietnamese fisheries surveillance ship and then one of them suddenly sped up to overtake the Vietnamese vessel. That Chinese ship later moved in front of the local vessel, attempting to make it seem as if the local vessel was pursuing the Chinese ship. After that, many other Chinese vessels, including vessels #21101, #2401, and #12101, applied the same trick, but all Vietnamese ships managed to avoid the trap. In the afternoon, four Chinese planes hovered above Vietnam’s vessels while Chinese ships sounded their horns, threatening local watercrafts. However, all the Vietnamese vessels stayed in the area to try to persuade the rig and its escort forces to leave Vietnamese waters. Meanwhile, Vietnam Coast Guard ships hung banners and used loudspeakers to ask all of the Chinese forces to vacate the area. Three of these Vietnamese ships – # 2013, #2015, and #2016 –   entered an area about 4-5 nautical miles from the rig. In response, the Chinese side immediately deployed dozens of ships in a horizontal formation to travel toward the Vietnamese vessels at a speed of about 20 nautical miles per hour. When they were about to ram the local vessels, they slowed down for a moment before moving forward again. They repeated the same move many times to threaten the Vietnamese ships.  Suddenly, two of the Chinese ships – #3411 and #4401 – accelerated to crash into the side of the Vietnamese boat, which managed to escape the attack. Despite such threats from their rivals, the Vietnamese vessels did not waver and continued to ask the ships to leave Vietnam’s seas. The fact that many Chinese ships raised their guns in a position ready to open fire on Wednesday showed their aggression, Senior Lieutenant Colonel Tran Quang Tuan, a Vietnam Coast Guard leader, said.  However, as they probably knew that many local and international reporters were aboard the Vietnam Coast Guard ships, their attitude was generally less fierce than in previous days, the official said. China has positioned oil rig Haiyang Shiyou 981 at a location of 15°29’58’’ North latitude and 111°12’06’’ East longitude in the East Vietnam Sea since May 1 despite strong protests from Vietnam. This location lies well within Vietnam’s exclusive economic zone and continental shelf, according to the Vietnamese Ministry of Foreign Affairs.