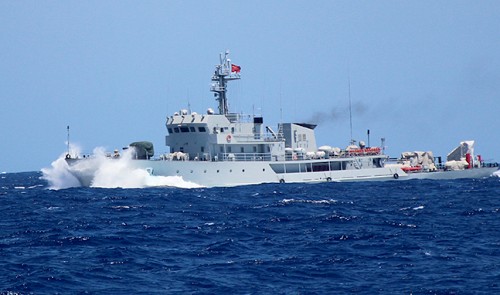 >> China’s spying plane flies only 150 meters above Vietnamese vessels >> China deploys 116 ships in Vietnam’s waters to threat local vessels>> China seizes Vietnamese ship with 6 fishermen off Hoang Sa>> Vietnam preparing documents to sue China: premier >> Chinese minesweeper bullies Vietnamese ship in Vietnam’s waters Despite strong protests from Vietnam, China has maintained its oil rig Haiyang Shiyou 981 in the Southeast Asian country’s exclusive economic zone and continental shelf since May 1, along with a strong fleet to guard it. Yesterday, China deployed about 110 vessels, including 47 coast guard ships, 14 transport boats, 13 tugboats, four military vessels and more than 30 fishing ships around the area, the department reported. These vessels formed in three arcs around the platform to guard it. They often sounded their sirens loudly and were ready to rush toward and ram any Vietnamese ships that tried to approach the drilling platform. However, Vietnamese ships managed to avoid colliding with the foreign vessels while trying to get as close to the rig as possible to demand that it and its escorting ships leave the Vietnamese waters. China also deployed planes to the area to threaten and spy on Vietnamese vessels. At 8:50 am, a helicopter flew from the rig toward the sky above Vietnamese vessels at an altitude of 300-500 meters. The plane hovered for a while before returning to the platform. Later, at 11:20 am, a fixed-wing plane flew in from the north and hovered two rounds at an elevation of 800-1,000 meters before flying back in the direction it came. Meanwhile, over 30 Chinese iron-clad vessels, with the support of two Chinese coast guard ships, approached and threatened Vietnamese counterparts that were operating in their traditional fishing ground about 40 nautical miles west-southwest of the rig. Despite threats from the Chinese side, local fishing boats tried to maintain operations in the area under the protection of Vietnamese fisheries surveillance ships.