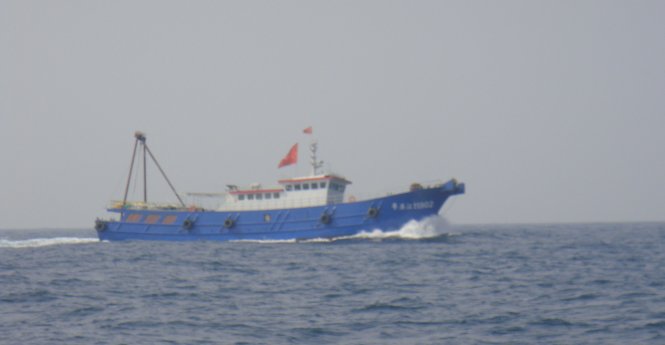 Over the past ten years, Vietnamese marine law enforcement forces have expelled over 9,500 Chinese vessels that were caught illegally fishing in Vietnamese waters, a report said Friday. Specifically, the Vietnam Coast Guard has driven away 7,781 Chinese vessels, while the Border Guard forces intercepted another 1,800 encroaching ships, the report said. It was delivered by the Vietnamese Sub-committee of the Vietnam-China Joint Committee for Cooperation in Fisheries at a conference held by the Ministry of Agriculture and Rural Development in the central city of Da Nang on Friday. The conference was aimed at reviewing the 10-year implementation of the Vietnam-China Agreement on Fishery Cooperation in the Tonkin Gulf. Many high-capacity Chinese ships, equipped with advanced equipment and tools, have illegally conducted illegal fishing near Vietnam’s islands in the East Vietnam Sea, the report said.  Many of the Chinese ships did not comply with common regulations on urgent shelter, deliberately entering the waters of Bach Long Vi Island, administered by the northern city of Hai Phong, on the pretext of avoiding violent winds. There have been many cases in which Chinese ships resisted against Vietnamese marine law enforcement forces when they were requested to leave Vietnamese waters. Illegal fishing by encroaching vessels has caused losses for Vietnam’s fisheries and affected normal and legal operations by Vietnamese fishermen in Vietnam’s territorial waters, said Nguyen Van Trung, deputy head of the Vietnamese Fisheries Resources Surveillance Department. Meanwhile, many Chinese law enforcement ships have recently conducted violent actions against Vietnamese fishermen who operate legally on their boats in waters belonging to Vietnam, Trung said. Trung added that the collection of evidence on aggressive actions is necessary to demand that the Chinese side stop harassing Vietnamese fishermen at sea, he said.