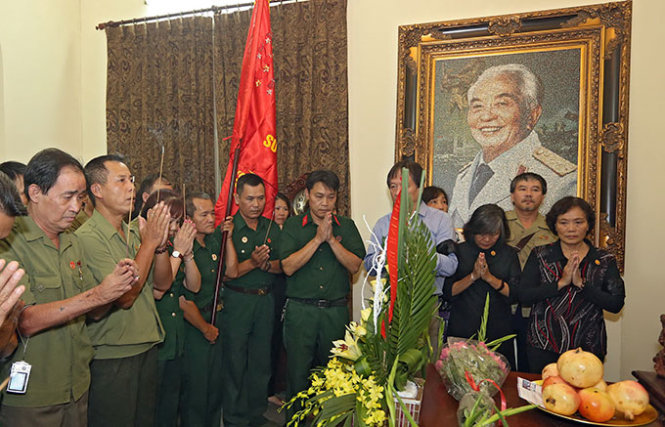 A large number of visitors flocked to his house in Hanoi and resting place in central Vietnam to commemorate legendary General Vo Nguyen Giap’s first death anniversary on Saturday.

People flooded Gen. Giap’s house at 30 Hoang Dieu Street in Ba Dinh District to mark one year of his death.

Yellow daisies offered by visitors were placed neatly from his house’s entrance to the altar where his photo is laid for worship.

Many from other provinces covered hundreds of kilometers to pay tribute to the general at his house.

Vo Tan Van, Nguyen Van Duan, and Le Manh, who are from Quang Ngai Province in the central region, rode their bikes through an almost 1,000km distance to the capital city to pay their homage.

Manh said that though it was quite an exhausting trip, the three were determined to visit the revered general.

Le Thi Duong, 62, from Nghe An Province also in the central part, shared that she, her children, and grandchildren had traveled a long way by bus to offer incense to the general.

Duong and her family waited for two hours and a half yesterday but still were not allowed in. Later, the whole family managed to get in and pay homage to Gen. Giap.

Among them, Dang Hoai Nam’s family of 11 members – including kids and the elderly – came all the way from Binh Duong Province in the southern part of the country.

Nam said that his entire family was resolved to visit the general’s tomb at least once in their life.

“Last year, I came to Quang Binh Province to bid the last farewell to the general, but couldn’t approach his tomb, as it was too crowded. My wish has now come true, as I’m here, right in front of his tomb,” shared Duong Thi Hanh, Nam’s mother.

There are several deeply moving stories of the visitors’ special emotions for the general which are indelibly imprinted on their minds.

In January 2014, a group of people from the Mekong Delta visited the area.

Among them was a 93-year-old woman, who could hardly walk without someone’s support.

The visitors said that the old woman hitched a ride on their bus to the general’s tomb, as she could not afford the fare to Quang Binh Province and had to wave at passing buses.

The story moved the guards who are tasked with protecting the tomb area to tears.

“Now that I’ve visited Gen. Giap’s tomb, I can die satisfied at any moment,” she said.

Nguyen Huyen, Gen. Giap’s former secretary, shared that he feels as if the general was still here with him.

He expressed his hope that a museum dedicated to the general will be built soon, so people from across the country – particularly the young – can learn more about the general’s life, career, and devotion.

In front of his tomb are 103 lush apricot trees, which stand for his age of 103, according to the Vietnamese’s calculation, when he passed away.

Gen. Giap, the first four-star general and the former commander-in-chief of the Vietnam Army, passed away on October 4 of last year in Hanoi, more than a month after he celebrated his 102nd birthday.

The 3.5km road section from National Highway 1 to the tomb area has now been concreted.

Work is also about to start on other components including a guest-welcoming house, restrooms, and parking lots, which are all estimated to cost a total of VND30 billion (US$1.41 million).

In August 2014, the Quang Binh People’s Committee gave the green light to three projects in honor of Gen. Giap: a statue and a park in the province’s Dong Hoi City, and a commemorative house in his hometown of Le Thuy District.

Seasoned historian Phan Huy Le, chair of the Vietnam Association of Historical Sciences, told Tuoi Tre (Youth) newspaper that with his family’s consent, he will propose to the Hanoi People’s Committee and the Ministry of Culture, Sports, and Tourism that a house be built at Le’s own residence at 30 Hoang Dieu Street, Ba Dinh District in commemoration of Gen. Giap.

Born in 1911 in Quang Binh, Gen. Giap started his career as a history teacher before joining the military, eventually becoming the legendary general who led the Vietnam Army to victory against the French and U.S. forces in 1954 and 1975, respectively.

He commanded several major operations, including at Dien Bien Phu in 1954 and Saigon (the former name of Ho Chi Minh City) in 1975.

Gen. Giap served as Deputy Prime Minister and National Defense Minister from 1975 to 1980. From 1981 to 1991, he was Deputy Chairman of the Council of Ministers.

His funeral attracted thousands of locals who queued for hours to pay tribute to the general.

A large number of locals left burning candles around his house in Quang Binh Province late last month to commemorate his first death anniversary in accordance with the lunar calendar.