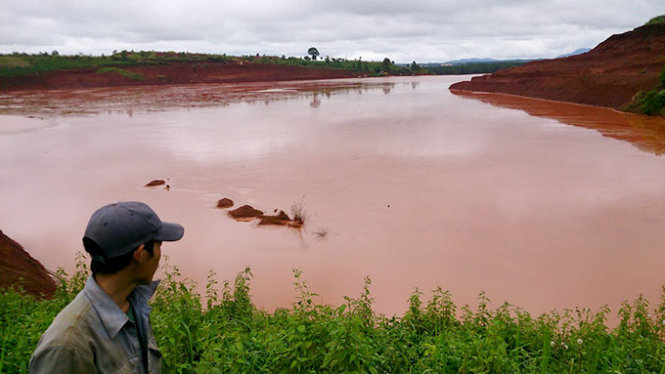 The embankment of a dam used to store leftovers from Tan Rai bauxite ore mining plant in the Central Highlands province of Lam Dong broke on Wednesday, discharging a huge amount of non-toxic water, the provincial Department of Natural Resources and Environment reported.

The incident occurred at 3:15 am, when a section, 5 meters long and 1 meter tall, of the embankment broke, which could be due to prolonged rain waters bearing down on the dam wall.

The water that had not been drained out in time gradually eroded the dam’s embankment, leading to the collapse, said Nguyen Dang Hoa, a technical executive of the Lam Dong Aluminum One-Member Co., Ltd.

The total volume of water gushed out is estimated at 20,000 cubic meters, according to the company’s calculations.

After the incident occurred, the company mobilized vehicles and workers to the scene to mend the broken section.

At 4:15 am, the mending was complete, preventing any more damage.

The damaged part belongs to a subsidiary embankment of this waste storage dam, also known as the tailings dam.

The company has suspended its operation to focus on works to consolidate the dam after the incident.

The incident causes no loss in life and equipment of the plant, as only the water on the top layer in the dam overflowed, while red mud still remains deep in the dam, according to the department.

The agency also affirmed that this water is non-toxic, so it will not affect the ecological environment as well as crops of local residents.

“This tailings dam has been built in accordance with the approved design,” Luong Van Ngu, deputy director of the department, said at a press briefing held in Wednesday afternoon about the incident.