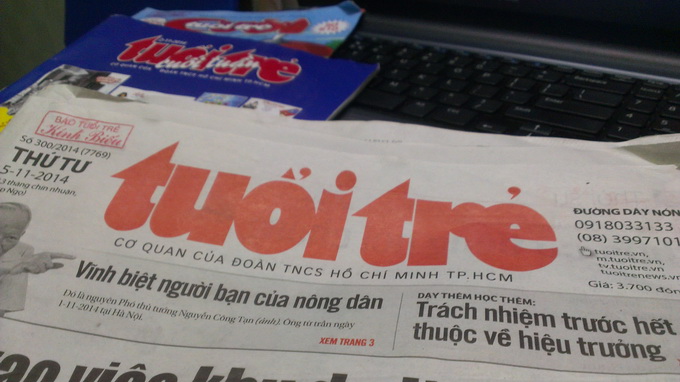 Here are the leading Vietnam news stories in brief for November 13, 2014.

-- Vietnamese Prime Minister Nguyen Tan Dung on Wednesday attended the ASEAN Summit with partners and a meeting to celebrate the 40th anniversary of the ASEAN–Australia partnership in Nay Pyi Taw, Myanmar.

-- Hungary is willing to share its experience and cooperate with Vietnam in judicial matters, Hungarian President of the Supreme Court Peter Darak told Vietnamese State President Truong Tan Sang during a meeting in Hanoi on Wednesday.

-- The Ministry of Labor, War Invalids, and Social Affairs has proposed that Vietnam enjoy nine days of Tet (the country’s Lunar New Year) from February 17 to 23, 2015.

-- A man in the Mekong Delta city of Can Tho was put Wednesday in police custody for two months after he was caught selling kerosene mixed with water to gas stations in the city’s Cai Nuoc District last month.

-- Nguyen Hai Trieu, 34, on Wednesday set himself on fire in front of the District 5 police office in Ho Chi Minh City.

-- The Vendémiaire, a light monitoring frigate of the French navy, will visit the central Vietnamese city of Da Nang from November 15 to 19, according to the French Embassy in Hanoi.

-- The State Bank of Vietnam and the World Bank on Wednesday signed a US$500 million loan for a $731.25 million operation in support of Vietnam’s energy sector.

-- The Vietnamese agriculture sector is attractive to Japanese investors, and is expected to receive a fresh wave of investment from the East Asian country’s businesses, the head of Vietnam’s trade office in Japan told Tuoi Tre (Youth) newspaper in an interview published Thursday.

-- As many as 350 universities and colleges countrywide have signed up to join the Vietnam Association of Universities and Colleges, which is slated to be established in mid-December.

-- Overseas Vietnamese singer Le Uyen, who has returned to her home country after living in the U.S. for over 30 years, will dedicate her two performances at the Tieng Xua lounge in Ho Chi Minh City this weekend to students.

-- Five out of nine Vietnamese participants won prizes at the Nanning-ASEAN Board and Card Games International Chess Invitation Tournament 2014, which wrapped up Wednesday in China.