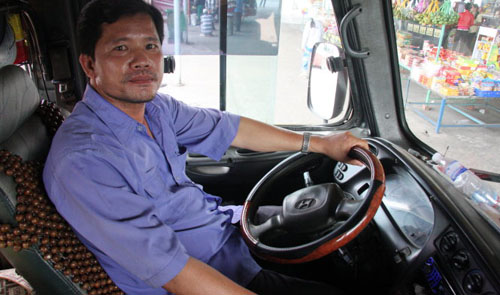 A coach with over 30 passengers on board was speeding toward dozens of motorbike drivers who stopped at a red light since its brakes were having problems.

The vehicle was traveling at over 40 kilometers per hour when it was just 10 meters behind a group of motorbikes idling at the Dong Tam crossroads of Tien Giang Province in southern Vietnam.

The coach driver, Nguyen Van Lanh, 41, had only one option: to swerve to the right to avoid hitting the motorbikes and crash directly into a traffic post.

One of his legs was broken in the accident on November 22 two years ago, but he saved the lives of dozens of other people on the road.

It was a surprise to meet him again this month, once again driving a passenger coach.

Risking his life to save others

It was 10:30 am at the Dong Tam crossroads. The coach, owned by Xe Ty with a number plate of 67L-3695, was unable to stop when the light turned red with many motorbikes in front.

Lanh recalled that when he realized the bus’s brakes were not working properly he downshifted to lower the speed, but this did not help much.

When the coach – plying its regular route from An Giang Province in the Mekong Delta to the southern province of Binh Duong – was around ten meters from the motorbikes, the driver decided he would rather sustain injuries than cause others to die.

Immediately, he swerved to the right side to avoid the mass of bikes and slammed into the traffic post. He broke one leg and damaged two motorbikes, but only three people were slightly hurt by the accident.

The loud bang from the crash startled local people living in the area, which is near the starting point of the Ho Chi Minh City-Trung Luong Expressway.

Smoke poured from the front of the coach, and traffic policemen arrived to put out the fire. People fled the scene in confusion over fears that the bus might explode.

Lanh was stuck in his driving seat and passed out thanks to blood loss.

“I can’t stop thinking of the scene with 20 motorbikes in front of me,” Lanh admitted. “I was thinking simply that I had to take responsibility for my driving.”

Although the toes on his broken right leg are still painful and swollen, he managed to resume driving once he recovered to earn a living for his family, with an elderly mother and a 12-year-old son.

Lanh said he has no land for cultivation, so his only option is to drive.

Regular commuters who heard of the accident and know Lanh have placed their confidence in him.

They told him they are willing to travel on his coach even if he changes to other transport firms, Lanh said.

Now he is driving for Thanh Thao at a monthly salary of VND11 million (US$528).

He was not fined by police for the accident because it occurred suddenly and there was no driver error.

The coach owner paid over VND42 million ($2,000) for the injured people, damaged motorbikes, and traffic post.

Lanh was even commended by local authorities for his courage in saving the lives of other people in the accident.