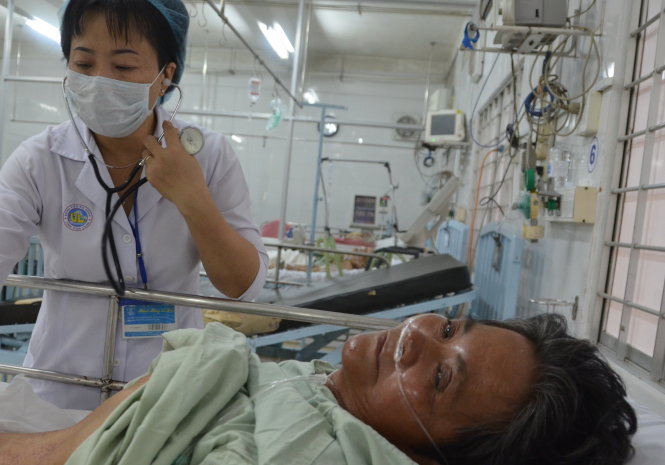 In a strange but true story, an elderly Vietnamese woman in southern Vietnam was found alive on Tuesday on a cluster of water hyacinth drifting on a river she had fallen into five days earlier. Pham Thi Mai, 63, from Vinh Long province’s Vinh Long City, was rescued in the afternoon of November 11, local police reported. Around noon that day fishermen in Phuoc Hau Commune, Long Ho District, Vinh Long Province, found the woman lying on a cluster of water hyacinth drifting on the Duong Chua River in the district and reported what they had seen to local police, who helped bring Mai who was nearly unconscious, ashore. She was taken to Vinh Long General Hospital in a semi-coma. Her arms and legs were blue and insect bites covered her body, said Dr. Ho Bich Thuy, head of the hospital’s emergency, intensive care and toxicology department. Mai was suffering from serious dehydration and exhaustion, but her blood pleasure remained at a normal level: 12/7, the doctor said. Tran Van Toi, the woman’s son-in-law, said she has previously suffered two cerebrovascular accidents, but she is able to walk and take care of herself. Mai’s family members saw her at home on the night of November 6, but at 4 am the next morning, she was missing, Toi said. The family hired boats to search for her on the river for consecutive days but they couldn’t find her, Toi added. “This is a rare case as she survived five days lying on a cluster of water hyacinth on a river without food and suffering from the impact of sunlight, rain and wind,” Dr. Thuy said. Luckily, she had not been hit by any boats on the river, the doctor added. After receiving proper treatment and intensive care, Mai recovered from her coma Wednesday afternoon and was able to reply to doctors’ questions and follow their instructions, Dr. Thuy said. She was still in the hospital’s intensive care unit when Tuoi Tre reporters visited her yesterday afternoon. She said she could not remember how she had fallen into the river, but remembers that she had found a large cluster of water hyacinth and tried climbing onto it.

At that time, she was too tired to cry for help, the women said. Mai added that she did not sleep while drifting on the river, but sometimes entered a semi-comatose state, only to regain consciousness when water splashed her face, before passing out again. She felt very hungry and thirsty while she was conscious, but there was nothing for her to drink but river water. Doctors asked whether she had thought about death when she was drifting on the river, and Mai smiled and said, “I only thought of food at that time.”