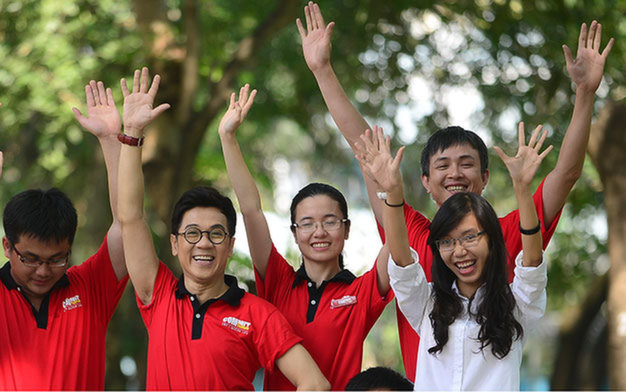 Dozens of Vietnamese artists and showbiz celebrities are taking part in a UNESCO project to raise people’s awareness of road safety together with environmental protection, and help nurture good manners in public places.

The celebs, led by veteran artist Thanh Loc, are drawing everyone’s attention to a project named Commit Vietnam initiated by the UNESCO Center for Culture and Education (UNESCO – CEP Vietnam) on October 25.

Loc is urging everyone, particularly the young, to partake in the project on his Facebook page.

His appeal has been well embraced by a large number of young people.

While the project aims at fostering public awareness of traffic safety and culture, environmental protection, and public manners for a better image of Vietnam, it focuses on promoting road safety and culture in Ho Chi Minh City in its first year of implementation.

This is a further attempt to call on people to strictly comply with traffic laws so as to minimize the number of accidents and fatalities, as Vietnam in general and the densely-populated southern city in particular have been plagued by chaotic traffic and rampant rule violations.

The project coordinators will send participants emails on a weekly basis to help them monitor their traffic behavior.

The coordinators will also recap their performance once every three months and come up with new activities.

According to UNESCO – CEP, the project will stop when the number of participants reaches one million.

More than 700 people signed a document of commitment to the initiative on Thursday.

Over 20 artists have engaged in the project and served as its ambassadors, including Uyen Linh, the winner of the 2010 Vietnam Idol singing competition, Korean singer Hari Won, and F Band – the runner up of this year’s local version of The X Factor reality show.

The number promises to go up, thanks to its significant message and good values, UNESCO – CEP says on its website.

Huynh Phan Anh Sa, a project volunteer in his late 30s, noted that Commit Vietnam is intended to call for participants’ commitment, not theoretical education, which he and other volunteers consider the best approach.

He added UNESCO has no longer funded its Vietnam chapter’s activities.

Sa said, however, that no pay does not mean the volunteers’ zeal will diminish.

“We sometimes need to give ourselves slaps on the face,” seasoned artist Thanh Loc said while explaining the rationale behind his appeal.

Loc recalled that some ten years ago, he produced a TV program airing in prime time to instruct kids to abide by traffic laws.

To his dismay, the program was later aired at 7:00 am, when children typically leave home for school, as it was replaced with another revenue-earning program broadcast in that ‘golden’ time frame.

“I’m really happy to join the project, as it allows me to remind myself and others to stay away from traffic violations, which have long become so rife in Vietnam,” noted composer Huy Tuan said.

“When I first returned to Vietnam in late 2007, I was shocked at the chaotic traffic. It later dawned on me that Vietnamese drivers’ misbehaviors or lawbreaking acts aren’t a matter of nature but an ingrained habit,” he observed.

Linh said he will spread the word about the project on his Facebook page and the media and join offline meetings with its young volunteers.

The musician added he will also compose songs for the initiative, which will make their debut in a gala in January 2015.