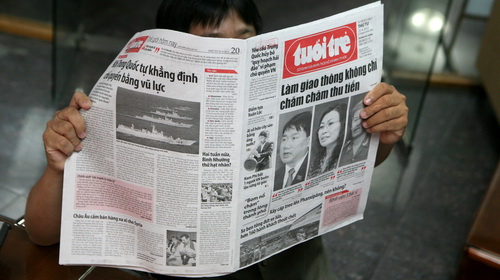 Tuoi Tre News briefs you on some of the leading stories published today, December 27, in Vietnamese media.

Politics -- Vietnam always respects and promotes the neighborliness, friendship, and comprehensive cooperation between the country and China, Vietnamese Party General Secretary Nguyen Phu Trong told the visiting Chairman of the National Committee of the Chinese People’s Political Consultative Conference Yu Zhengsheng on Friday. Regarding the disagreements between the two sides, the host stressed that the two countries’ leaders should exchange views sincerely to address them satisfactorily for mutual interest.Society -- Police in the central province of Nghe An are investigating a case in which two students – a 17-year-old schoolboy and a 15-year-old schoolgirl – from Dang Thai Mai High School were found hanged in an unoccupied house in Thanh Chuong District. Sources said the two students had committed suicide out of sadness resulting from their love affair. -- Thirty-one pregnant women were injected with an incorrect vaccine at a health center in Tu Son Town of the northern province of Bac Ninh on December 20. Instead of giving the women a tetanus vaccination, health workers gave them a shot against diphtheria, tetanus, and whooping cough, which is not indicated for use for pregnant women. However, health experts said this vaccine does not harm fetuses.

-- Authorities of the Central Highlands province of Dak Nong have asked the local Department of Culture, Sports, and Tourism to coordinate with the Geological Museum to set up a project to build a national geological park in the area where the first six volcanic caves in Vietnam were recently discovered. The project aims to obtain UNESCO recognition of the park as a global geological park.  -- Northern Vietnam will continue to experience chilled weather thanks to a cold snap that is entering the region today. The new cold spell is forecast to cause rough seas in the northern and middle areas of the East Vietnam Sea and bring rain to the northern and central parts of the mainland. -- Vo Van Hai, 40, head of a forest protection team in the central province of Thanh Hoa, has been arrested for taking a bribe of VND100 million (US$4,680) from the owner of the smuggled wood he had seized.Business

-- Gasoline prices in Vietnam decreased by 30.2 percent from July 7 to only VND17,880 per liter on December 22, but taxi charges shrank by a mere 3.03 percent during the same period, according to statistics. That means taxi firms are enjoying an additional profit of VND1,031 per km thanks to the petrol price reduction.

-- Vietnam’s inflation rates in 2015 are forecast to range between two and three percent, as the world economy will likely continue facing difficulties next year, financial experts said at a seminar held by the Economics and Finance Institute on Friday.

-- After running in Ho Chi Minh City on Friday evening, the RockStorm 7 festival featuring six rock bands will take place in the Mekong Delta city of Can Tho on January 3 before being organized in Hanoi a week later.

-- Chelsea defeated West Ham United 2-0, with goals from John Terry and Diego Costa, at Stamford Bridge on Friday evening (Vietnam time) in the 18th round of the British Premier League. With the victory, Chelsea continue to lead the rankings with 45 points after 19 matches.