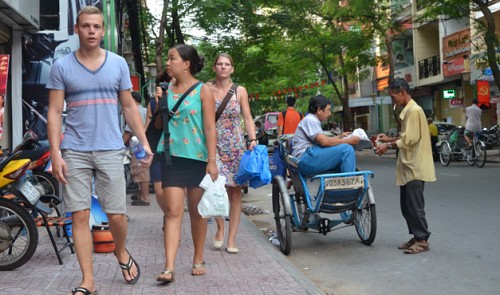 Police in Ho Chi Minh City have cracked down on a 14-member pickpocket gang that targeted foreigners in the “backpacker area.”

>> Police arrest thieves in ‘backpacker area’ in Ho Chi Minh City Officers arrested 11 members of the group on Thursday on suspicion of “stealing properties” and “harboring or consuming property" acquired through the commission of crimes by other people. As for the remaining three, police have banned them from leaving their residence pending further investigation into their involvement, the city’s Social Crime Investigation Department said. The gang was led by a 29-year-old woman, Huynh Thi Ngoc Dung, aka Mut, who resides in District 4 and has two previous convictions. They operated in the “backpacker area” in Pham Ngu Lao Ward, District 1, where a community of foreigners lives, and pickpocketed numerous wallets and cellphones. Whenever she detected a “prey,” Dung approached the potential victim, snatched a mobile phone from his or her hands, and escaped on a motorbike. According to the case file, police in Pham Phu Lao Ward launched a campaign to crack down on the gang in October after about 30 foreigners reported that they had fallen victim to a pickpocket gang in the area. After nearly two months of investigation, the police caught Dung and her accomplice, Truong Hoang Nam, 26, picking an iPhone 4 from the pocket of an American tourist at the intersection of Bui Vien and De Tham Streets in the ward at 3:00 am on Thursday. A police team arrested Dung and Nam when they attempted to flee the scene on a motorbike. At the same time, other police teams captured nine more gang members that were operating in other parts of the "backpacker area." Dung told police that her gang began to operate in mid-2014 and had pickpocketed 15 foreigners on De Tham, Bui Vien, and Pham Ngu Lao Streets. They usually looked for “prey” at midnight or in the early hours when foreigners are leaving bars and restaurants, often drunk, Dung said.  The gang sold most of the stolen cellphones to the Tuan Anh phone shop, owned by 26-year-old Nguyen Chi Thanh, at 160 Tran Hung Dao Street in Nguyen Cu Trinh Ward in District 1. Further investigation is underway.