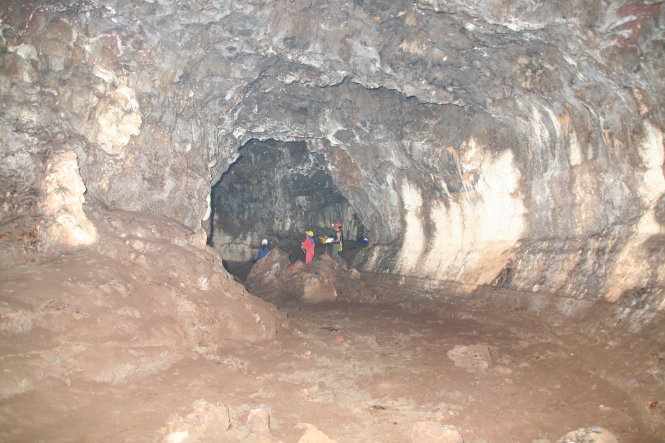 Authorities of the Central Highlands province of Dak Nong are conceiving a project to build a geological park (geopark) that houses 12 volcanic caves recently discovered in Vietnam, with a view to obtaining UNESCO recognition of the place as a global geopark in the future, a senior official has said.

This information was released by Tran Phuong, deputy secretary of the provincial Party Committee, at a press conference held by the General Department of Geology and Minerals of Vietnam on Friday. The conference followed the announcement of the discovery of the first-ever volcanic cave system – consisting of 12 caves – in the Southeast Asian country, one part of which is considered the longest such feature in Southeast Asia. The discovery was made in Krong No District of Dak Nong by experts from the general department and the Japan Caving Association (JCA) after seven years of research, Nguyen Van Thuan, head of the department, told Tuoi Tre (Youth) newspaper in an interview published on Wednesday.

In 2007, scientists from the general department detected some volcanic caves in the district and JCA experts have since joined their counterparts in further explorations, Thuan said.

One of the 12 volcanic caves discovered in the Central Highlands province of Dak Nong. Photo: Tuoi Tre

“We have assigned the local Department of Culture, Sports, and Tourism to coordinate with the Geological Museum to set up a project to build a national geopark that includes the 12 volcanic caves in Krong No,” Phuong, the deputy secretary, said. The project will be submitted to the Prime Minister and relevant agencies for consideration, the official said, adding that their most important plan is to introduce the park to UNESCO with a view to obtaining its recognition of the place as a global geopark.

Dr. Hiroshi Tachiohara, honorary president of the JCA, said at the press conference that five of Southeast Asia’s six longest volcanic caves belong to the volcanic cave system that has just been found in Vietnam.    Of the 12 caves, three of which have been measured in detail, Thuan, of the general department, told Tuoi Tre. One of the three is 1,055 meters long and the Japanese scientists said it is the longest volcanic cave in Southeast Asia, Thuan said, adding that some parts of this cave cover thousands of square meters.

The discovery will be of great significance to international geological and archeological studies, as very few places in the world have such a system of volcanic caves and craters as that in Krong No, Thuan added.

“When we have enough data on all 12 caves, we will officially declare the system to the world and devise a proposal to set up a global volcanic geopark at the location, similar to the current limestone geopark in the northern province of Ha Giang,” Thuan said. UNESCO defines a geopark as an area containing geological heritage sites of particular importance. These Earth heritage sites require a comprehensive and coordinated management framework and a strategy for sustainable economic development, according to the UN body. “Geoparks use that heritage to promote awareness of key issues facing society in the context of the dynamic planet we all live on,” UNESCO says on its website. Many geoparks promote awareness of geological hazards, including volcanoes, earthquakes, and tsunamis and many help prepare disaster mitigation strategies among local communities.