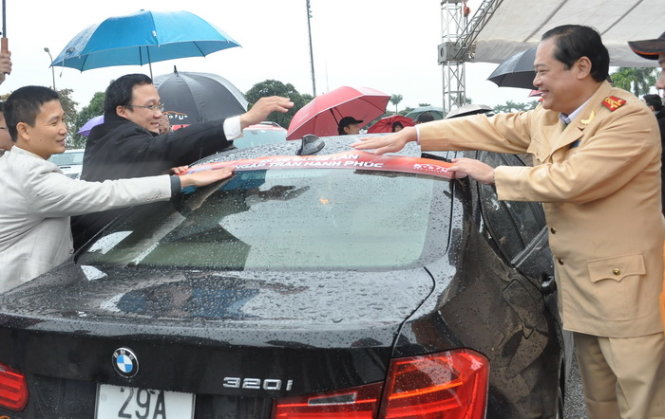 “Once You Have Drunk Alcohol or Beer, Don’t Drive” is one of the slogans being used in a traffic safety awareness program jointly run by a government agency and an automobile forum in Vietnam.

The National Traffic Safety Committee and Otofun, a Vietnamese forum with its address at www.otofun.net, kicked off an action program to keep people nationwide aware of traffic order and safety, deputy chairman of the committee Khuat Viet Hung said. Otofun is a major forum that is dedicated to lovers of cars in Vietnam. The committee highly appreciates the contributions of social forums, especially Otofun which has more than 250,000 members, to urging their members and these people’s relatives to ensure traffic order and safety, Hung said. Immediately after the launch of the program, many Otofun members stuck such slogans as “Đi đúng làn, ngập tràn hạnh phúc” (Driving in the Right Lane Brings a Great Deal of Happiness) and “Đã uống rượu bia thì không lái xe” (Once You Have Drunk Alcohol or Beer, Don’t Drive) on their vehicles. This is the first time that a forum in Vietnam has become an official channel for road safety awareness, according to Otofun.    Hung, the deputy chairman of the traffic safety committee, said that within this month the committee will sign an agreement with Otosaigon, another big automobile forum, to carry out a similar program. According to statistics of the committee, 209 traffic accidents occurred across the country, killing 104 people and injuring 135 others during the first four days of this year.

Compared to the same period last year, the death toll decreased by two, the number of accidents increased by 17, and that of injured people also rose by 17. On average, road accidents kill 9,000 people in Vietnam each year – almost 25 deaths per day – and leave hundreds of thousands of others with life-time injuries, Transport Minister Dinh La Thang said at a requiem held in Ho Chi Minh City on November 10, 2014 for the dead victims of the accidents.