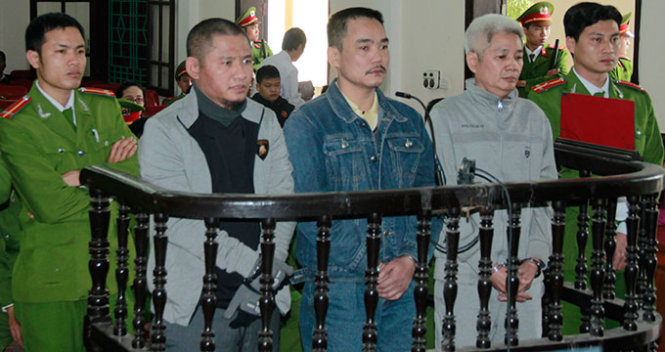 A Vietnam court on Tuesday handed down death sentences to two of the three members of a drug trafficking group that illegally traded 110 bricks of heroin, or roughly 38kg, last year.

>> Three condemned to death for smuggling 11kg of heroin in Vietnam Phan Dinh Tuan, 43, and Tran Quang Anh Dung, 48, received the capital punishment at their hearing opened by the People’s Court of the central province of Nghe An. They were charged with illegally trading drugs pursuant to Article 194 of the Penal Code. Tuan was a Nghe An resident while Dung came from Ho Chi Minh City. Besides the death sentence, Tuan was also given a six-year- sentence on charges of “illegally stockpiling military weapons” pursuant to Article 230 of the Penal Code.  The court also gave life imprisonment to the third member of the group, Nguyen Huu Song, 45, a Nghe An resident, for illegally transporting drugs.  According to the indictment, from late June 26 to mid-July, 2014, Tuan bought heroin three times at the Cau Treo border gate area in the north-central province of Ha Tinh, which borders Laos, and then hired Song to transport the products to Ho Chi Minh City by bus to deliver them to Dung for sale. During the above period, the ring bought, transported and traded a total of 1100 bricks of heroin, weighing about 38 kg. When the ring’s members were arrested on July 15, 2014, police also detained two military guns and 102 rounds of ammunition. On Monday, the same court handed down death sentences to three of the six members of another drug trafficking group that illegally traded 31 bricks of heroin, or roughly 11kg, from May to July 2013. Ngo Thanh Ly, 42, Phan Dinh Lap, 39, and Vu Thanh Trung, 42 received the capital punishment, while the three other members got life sentences.