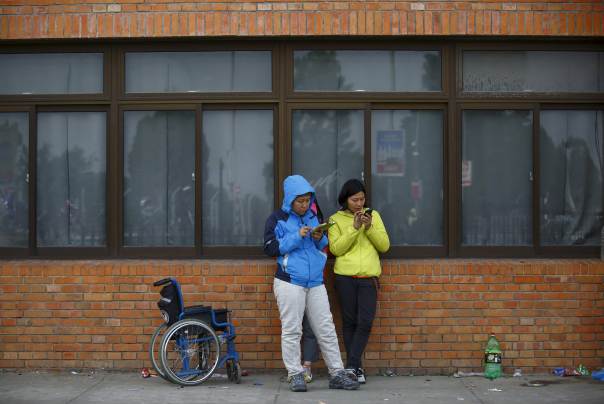 Friends and family members of a group of ten Vietnamese Red Cross employees could finally breathe a sigh of relief on Tuesday as their beloved all arrived safely in Hanoi from the earthquake-devastated Nepal the same day. These people, who work for the Vietnam Red Cross Society, are the first Vietnamese citizens to arrive home safely from Nepal, according to VnExpress. There are still five groups of Vietnamese nationals in Nepal, but their safety condition was confirmed by the Vietnamese Embassy in India on Monday. A devastating 7.8 magnitude earthquake struck the South Asian country last Saturday, killing more than 4,800, according to latest death toll updated as of Wednesday morning. The lucky Red Cross workers arrived in Nepal on April 19 to learn experience in coping with earthquakes from their Nepalese counterparts, and had scheduled to return on Sunday, according to VnExpress. But the disaster delayed their return trip by two days. “We were taken to a site to watch anti-earthquake drill on Saturday when a real quake did break out,” Nguyen Xuan Duy, one of the group members, was quoted by the newswire as saying. Even though the quake’s epicenter was 70 km away from the group’s location, they still saw everything around shaking strongly, the 43-year-old recounted. Fortunately, all of the group members were in safe conditions. The Red Cross employees then failed to contact with their relatives in Vietnam due to power loss and telecommunication failure caused by the disaster, he added. They managed to arrive at the Tribhuvan International Airport in the Nepalese capital of Kathmandu on Sunday, and joined tens of thousands of others who were waiting to leave the country. But they could not board the flight, which was bound for China’s Guangzhou before landing in Hanoi, until Monday, after waiting for more than a day. As Vietnam does not have an embassy in Nepal, the Vietnamese Ministry of Foreign Affairs and the Vietnamese Embassy in India are closely coordinating with the Indian Foreign Ministry and the Nepalese authorities to protect these Vietnamese citizens and seek information about other Vietnamese who may be stuck somewhere in Nepal. A mission from the Vietnamese Embassy in India left for Kathmandu on Wednesday morning to give support to Vietnamese who are still stuck in Nepal, according to the Vietnam News Agency.  The Nepal disaster has left more than 4,800 people dead, over 9,200 others injured, and eight million people affected across Nepal, CNN reported on Wednesday, adding one million children are urgently in need of help. Nepalese Prime Minister Sushil Koirala was quoted by Reuters as saying on Tuesday that the death toll could reach 10,000, as information on damage from far-flung villages and towns has yet to come in. The deaths in this quake would surpass the 8,500 who died in a 1934 earthquake, the last disaster on this scale to hit the Himalayan nation, according to Reuters.