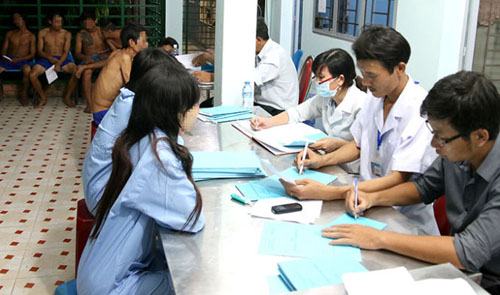 It is difficult to determine whether a person is a drug addict using the health ministry’s criteria, the Ministry of Labor, War Invalids, and Social Affairs (MOLISA) has said.

>> Court orders 11 Ho Chi Minh City junkies to undergo compulsory detoxification The ministry made the comment in a report recently sent to the National Assembly Committee for Social Affairs about the management of junkies without stable residence pending a court order to send them to obligatory drug detoxification centers. Pursuant to the Law on the Handling of Administrative Violations, which took effect on January 1, 2014, addicts can be sent to a drug detoxification facility only when a court judgment is issued for this purpose and when they fail to stay sober after being monitored for three to six months by local authorities.     Currently, all local competent agencies nationwide are facing a big problem in the process of applying compulsory drug detoxification to drug addicts under this law, the MOLISA said.

New regulations by the Ministry of Health (MOH) on authority and procedures to confirm a person as a drug addict so that the addict can be sent to an obligatory drug detoxification center have yet to be made available.

Meanwhile, under the current regulations, which were issued in 2007 and 2014, a person’s drug addiction is confirmed when it meets both test and clinical conditions, said Deputy Minister of MOLISA Nguyen Trong Dam. Regarding the clinical aspect, opium addicts must experience at least three out of the six symptoms for 12 months, and an exact confirmation of three symptoms requires a Q&A session between a health expert and the suspected drug addict, Dam said.

The crucial issue here is that the suspected addict must provide true information about his or her drug-related conditions, so that the heath expert can make an exact conclusion about his or her drug addiction levels, the deputy minister said. However, most suspected junkies questioned did not cooperate with health specialists during such sessions and gave replies that did not match their actual conditions, he lamented. For that reason, only 22 out of the 63 provinces and cities nationwide can make files of confirmed drug addicts so that they can be compulsorily detoxified under a court order. In order to improve this situation, the MOLISA has proposed that the Prime Minister direct the MOH to coordinate with the Ministry of Public Security and MOLISA to apply a common method to confirm drug addicts. According to this method, people who are caught abusing drugs and have been penalized many times for the same act, and those who relapsed into drug addiction after experiencing many rounds of detoxification, will be confirmed as drug addicts who are subject to obligatory rehabilitation, the MOLISA said.

In order to facilitate the implementation of this method, the MOLISA proposed that the National Assembly Committee for Social Affairs ask the law-making body to amend a regulation in the Law on the Handling of Administrative Violations. Accordingly, the phrase “applying administrative treatment measures to drug addicts” should be changed into “applying administrative treatment measures to people who illegally use drugs.”     The MOLISA also suggested that the Prime Minister direct the Ministry of Justice to revise regulations on, and simplify procedures related to, making files on drug addicts to save time and accelerate the process of detoxification for them.