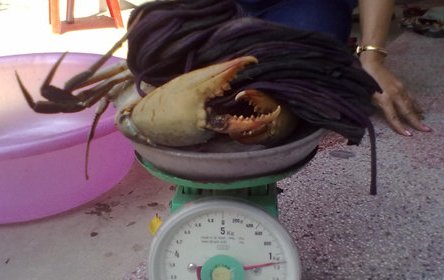 Buying live crabs in Vietnam: it’s the strings that matter

The next time you choose live crabs at eateries in Vietnam and have them prepared by the cooks there, remember to pay close attention to the strings used to tie their claws.

Live crabs are usually on sale with such strings in the country, with traders saying they help prevent attacks by the crustaceans, whereas the twine is in fact meant to increase the weight of the crabs.

And the strings can sometimes make a huge difference when it comes to payment, as An Chi, a Ho Chi Minh City resident, experienced in her tour to the beach city of Nha Trang in the south-central province of Khanh Hoa last month.

The tourist had intended to have dinner at a different place, but her pedicab driver insisted she try the Lang Chai on Nguyen Binh Khiem Street, and Chi eventually had to agree reluctantly, she wrote to Tuoi Tre (Youth) newspaper on Tuesday.

Chi then ordered some dishes and chose a crab, weighing 1.2kg, and had it boiled by the eatery.

When her favorite dish was served, Chi was shocked to see a much smaller crab, apparently weighing less than 0.5kg.

“I asked the waiter if there was a mistake in the kitchen, and he came back later with yet another small crab, plus a big crack on its body,” Chi recalled.

The angered tourist thus demanded to speak to the manager, who told her that the crab just lost weight during the boiling process.

“Other customers told me to put the crab on the scale again, which I did in the presence of the manager and waiters and waitresses,” Chi said.

The result is the boiled crab weighed only 420 grams.

The boiled crab and the meal bill are seen in this photo taken by An Chi.

“The manager then explained that the crab became lighter because it was boiled and the strings were removed,” Chi said.

The strings turned out to be nearly twice as heavy as the crab so she requested the restaurant manager to charge her based on the real weight of the crab.

The manager turned her down, saying she had agreed to the crab being weighed with the strings attached and made no complaint about it then.

“They said they had not forced me to buy [the crab],” she said.

In her complaint sent to Tuoi Tre, Chi also recounted how her call for help to the Khanh Hoa tourism promotion center was largely ignored.

Upon failing to claim a refund, Chi called the hotline of the center, whose director told the tourist in her third attempt that they could only receive the complaint and forward it to relevant agencies.

“[The director] said they could not send officials to the eatery because it was not working hours then, and that they were afraid of getting into a quarrel with the waiters and waitresses there,” Chi said.

The tourist ended up taking a photo of the crab and the bill for the meal, and sent them to the Khanh Hoa market surveillance agency.

On June 26, when she had already returned to Ho Chi Minh City, Chi received a reply via email from the agency, which in fact brought her yet another disappointing response.

The market watchdog said they had worked with the Lang Chai eatery, whose owner, Vo Hoang Son Hai, admitted that the strings used to tie the crab were as heavy as 0.5kg when soaked in water.

Hai thus asserted that the kitchen did not replace the crab Chi had chosen with a smaller crustacean.

The market surveillance agency, meanwhile, said selling crabs tied with strings is a common practice at seafood suppliers, and Chi and Lang Chai had agreed on the price when she chose the crab.

The agency thus concluded that “there are not enough grounds to accuse the eatery of dishonestly changing the crab.”

“As a customer, would you ever accept such an explanation?” Chi asked on ending her complaint.