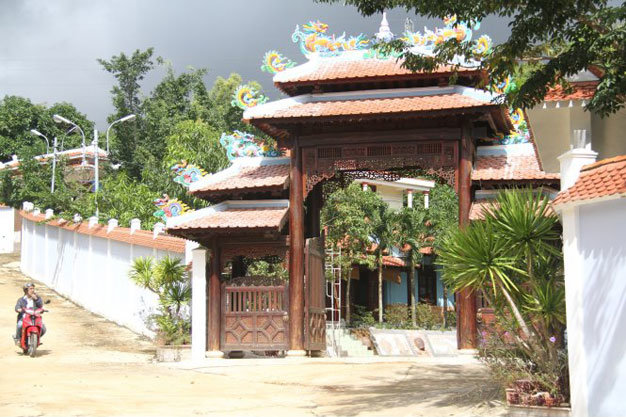 Authorities in the central city of Da Nang have forced the owner of a palace that was illegally built at a cost of over US$4.58 million to pull down the property. The decision was reached after months of discussion on how to deal with the bulky real estate, Chairman of the local People’s Committee Huynh Duc Tho said on Wednesday. The owner of the luxurious construction, seated on a forest land plot in Linh Chieu District, is Ngo Van Quang, director of Phuoc Minh Gold Mining Co. Ltd., which is based Quang Nam Province bordering Da Nang. On the same day, Tho released a notice providing a final conclusion on illegal construction activities carried out by Quang and Major General Phan Nhu Thach, former director of the Quang Nam Province Police Department. However, the case of Major General Thach has already been resolved as on March 4 he hired people to level a villa he had illegally built on forestland in the city four years ago, following an order from local authorities, Tho said. A month before that, on February 4, the Linh Chieu District People’s Committee summoned the representatives of the families of Major General Thach and Quang to their office to receive the decisions. Under these decisions, the owners of the properties were fined VND22.5 million (then $1,050) each for the illegal construction work and were ordered to remove their buildings within 35 days from February 4. While Major General Thach demolished his villa, Quang sent petitions to a number of competent agencies, including the Ministry of Natural Resources and Environment, asking for his palace to be maintained. The ministry later referred Quang’s petitions to Da Nang authorities for consideration, Tho said.

As Quang’s palace is worth as much as VND100 billion ($4.58 million), the authorities discussed how to deal with it. After months of debate, on July 1, the Da Nang Party Committee Standing Board convened a meeting and came to a final decision that the illicit building must bite the dust.