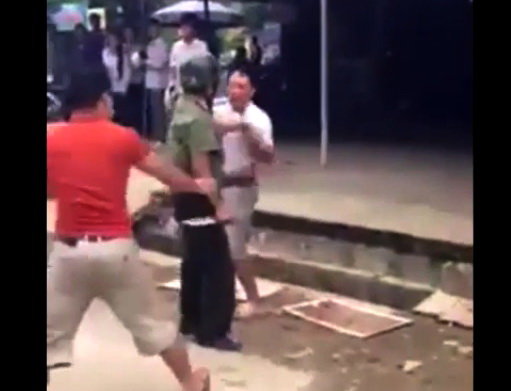 Cop suspended over knife fight with driver in northern Vietnam

A police officer in the northern province of Bac Kan was suspended after a video clip showing him in a knife fight with a truck driver surfaced on the Internet on Friday. The man in police uniform in the footage is Trieu Dinh Thu, an officer at the Ba Be District police, Major General Ma Van La, director of the provincial police department, confirmed with Tuoi Tre (Youth) newspaper on Friday. Thu, a member of a security team of the district police, has been asked to submit a report about the fight, pending further decisions from the district and provincial police, Major General La added. The knife flight took place on Friday morning and someone had filmed and posted it online, according to Bac Kan police.

The video, seen by Tuoi Tre News, shows Thu brandishes a knife towards the driver, later identified as H.M.C.

Some local residents then prevented them from attacking each other. Both of the men thus suffered no injuries, La said. Thu and the driver, also a local resident, apparently had a conflict over ‘sentimental issues’ that led to the fight, according to an initial investigation by the district police. “Bac Kan police will strictly handle the case in accordance with applicable regulations,” said Major General La.