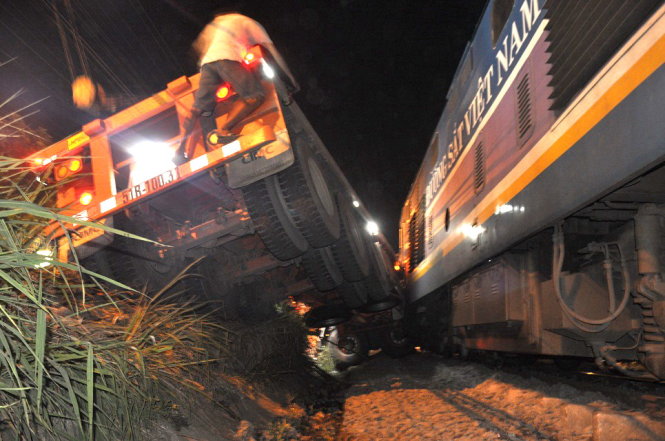 The number of traffic accidents between trains with cars and motorbikes in Vietnam has increased due to the crossing of railways and streets.

In the first five months this year, the traffic toll of the railways has gone up in all three categories of the cases of accident and the numbers of deaths and injuries, according to the National Traffic Safety Committee.

During the period, trains involved in 86 accidents, killing 76 people and injuring 24 others.

Nguyen Xuan Hoa, chairman of the Saigon Railways Management Company, said the outdated railways industry in Vietnam was mainly built over a century ago when the population was still sparse.

With the population boom in recent decades, railroads have had to go through more residential and urban areas and even markets, meaning an increase in the crossing of railways and streets.

Only Ho Chi Minh City now has over 3,000 crossings of railways and streets.

Yet, few flyover and tunnel has been built to facilitate traffic at the crossing sites, Hoa said.

In addition, residential areas have even been built along the railway and encroached upon the necessary space of trains, reducing the view of train drivers.

Nguyen Xuan Hung, head of the safety and technique department of the company, added that railways now have many busy crossings with streets as To Ngoc Van in Thu Duc District, No Trang Long in Binh Thanh District, and Nguyen Trong Tuyen in Phu Nhuan District.

The safety risks have been added with the unsafe installation of electricity grids and telecommunication wires.

Ten years ago, Ho Chi Minh City pioneered in building fences to separate railways from streets and residential areas but the safety utilities have been damaged by locals to make illegal entrance.

Hoa suggested local authorities where there are crossings of railways and streets to tighten check and ban the building of more crossings with railways.

Ha Ngoc Truong, deputy chairman of HCMC association of the construction of ports, roads, and bridges, proposed the city to build automatic barriers at the crossing of railways and streets.

The construction of such an automatic system, that will close any crossing over railway when a train is coming, is quite within the ability of domestic agencies.