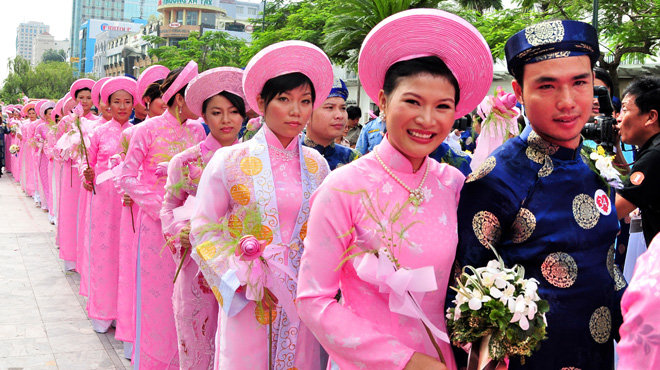 Vietnamese individuals and their foreign spouse-to-be should be freed from having an interview with justice authorities as part of the registration of their marriage, an official from the Ministry of Justice said Friday.

It is currently required that Vietnamese citizens and their future foreign spouses have an interview with the justice department at their locality, as a part of the procedures of marriage registration with foreign elements, according to Government Decree 24/2013.

Such interviews are considered a judicial measure that helps ensure a healthy marriage based on mutual understandings between Vietnamese citizens and their foreign spouses.

But Nguyen Cong Khanh, head of the Department of Civil Status, Nationality and Certification under the justice ministry, believes it is not really necessary to keep such procedure.

The interview procedure may also result in corruption between interviewers and interviewees, he added.

The justice ministry has thus decided to propose that the government abolish the above regulation in order to ensure the interests of people, simplifying administrative procedures, and save time and cost for those involved, Khanh said.

If the proposal is approved, Vietnamese citizens wishing to marry foreigners only need to apply for a certificate of marital status – to prove their single status – and will no longer be required to have an interview with local justice authorities, the official said.

In the future, the certification of marital status will also be eliminated when the national residency database is completed, he added.

The proposal won support from some attendees of the seminar, who said it is a strong renovation that helps effectively enforce the right to marry of people.

However, there were also naysayers who said it is necessary to have such interviews.

In the southern province of Long An, 23 out of 196 applications for certification of marriage between locals with foreigners in the year to date have been rejected, a provincial official told the seminar.

It is because the interviewees in these cases have failed to meet requirements under current regulations, he explained.

In response, Khanh said his department will continue considering whether such interviews should be abolished or not.