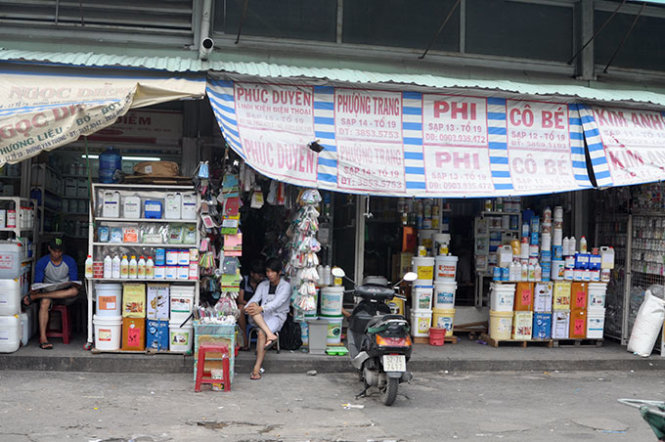 Ho Chi Minh City now has a total of 948 firms directly importing and trading in chemicals and they are scattered around residential areas, causing great risk of fire and explosion.

The companies deal in over 7,000 different kinds of chemicals, said Diep Dang Khoa, vice head of the representative office of the Chemical Department under the Ministry of Industry and Trade.

The municipal Department of Industry and Trade is now tasked with managing industrial chemicals.

The Department of Health is assigned to manage the trading of chemicals used for health and food processing activities.

And the Department of Agriculture and Rural Development supervises the usage of chemicals in aquaculture, veterinary medicine, and vegetation protection.

In addition, there is also a problem with law enforcement when it comes to managing chemical firms, delegates said at the meeting, further explaining that many companies are based in Ho Chi Minh City but they have their warehouses built in the neighboring provinces of Binh Duong, Dong Nai, and Long An.

Nguyen Thi Minh Tam from the environmental safety and technique unit under the city’s industry department said that Vietnam now has no law or regulation to stipulate the trade of chemical substances in mixtures.

She added that some chemicals with a 91 percent concentration are considered a kind of explosive so firms have bypassed it by diluting a certain chemical with ten percent of other substances to make it a mixture before extracting the chemical later.

Nguyen Trung Binh, vice chief of the market management department in Ho Chi Minh City, said some firms pour chemicals into smaller baskets for sale without labels detailing the names of the producers and suppliers.

Some companies even keep chemicals in the same boxes as other goods to avoid checks by competent agencies, Binh said.

Kim Bien Market in District 5 has 17 firms trading in chemicals and additives for food processing and they are under the management of authorities in the district.

In the meantime, 70 other companies dealing in chemicals and additives for food processing outside and near the market are managed by the health department, according to Nguyen Gia Hoa, vice head of the economic affairs unit in District 5.

The city is mulling the construction of a specific market for chemical trading firms but authorities have not yet decided on the exact location.