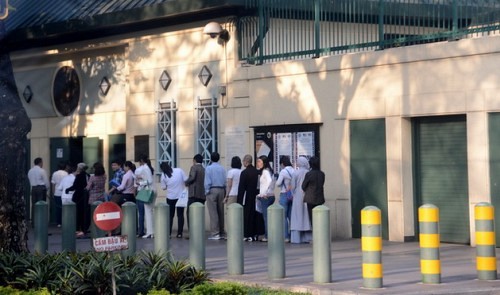 A former employee of the U.S. Consulate General in Ho Chi Minh City has been condemned to 64 months in prison in the U.S. for selling visas to Vietnamese non-immigrants who wanted to enter his country.

The verdict for Michael T. Sestak, former head of the non-resident visa department at the consulate general, was released by the federal court in Washington, D.C., on Friday (U.S. time), United Press International (UPI) reported.

Taking advantage of his position at the diplomatic agency in Ho Chi Minh City, which is the economic and financial hub of Vietnam, Sestak pocketed more than US$3 million from the sale of visas on the black market and then laundered the money by purchasing real estate in Thailand, The Washington Times said.

The news agency cited U.S. authorities as saying that, Sestak, 44, colluded with some American and Vietnamese citizens to approve the visas to receive $50,000-70,000 apiece in bribes from those Vietnamese who were seeking visas between March and September 2012.

Thanks to the illegal visa service offered by Sestak and his co-conspirators during the period, hundreds of Vietnamese people who had their U.S. visas previously denied were able to get them to go to the North American country, according to UPI.

The visa bribery ring grossed more than $9 million in two years for allowing about 500 fraudulent applications to be submitted, most of which were then adopted for the visas, according The Washington Times.

Sestak was arrested on May 13, 2013 in southern California and admitted his crime, according to UPI.

He also agreed to assist in the government's investigation and forfeiture of the proceeds of the crimes, the news agency said.

Some people involved in the case were also sentenced, including a U.S. citizen living in Vietnam. This person is obliged to eight years in prison for more than $5 million he earned from the fraud, according to The Washington Times.