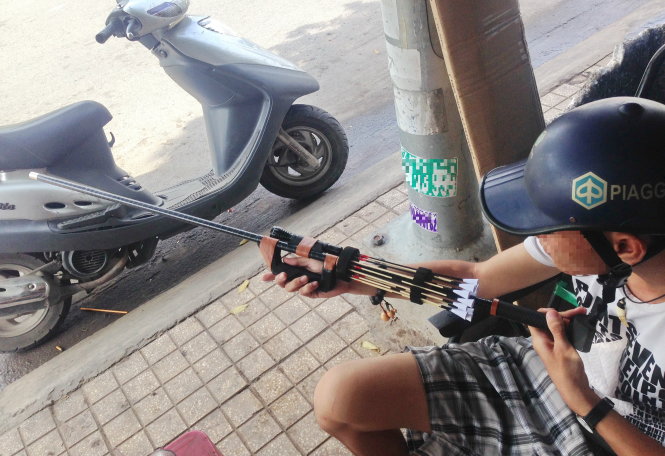 Simple but lethal tools such as crossbows and blowguns, homemade and imported, are being traded in Ho Chi Minh City despite a ban, a Tuoi Tre (Youth) newspaper investigation has found.

Thinh, a young man of Binh Tan District, told Tuoi Tre correspondents that he could make blowguns not only for his own use in hunting but also to sell to others.

He added that his blowguns, with dart points made with sharpened bamboo or metal, can be used as lethal weapons with a range of up to 35 meters.

Users can apply toxic chemicals to dart points to attack their targets of choice, Thinh said.

He added that he had used his tools to kill various animals, including rats, snakes, fish, frogs, birds, and even weasels.

Another trader of lethal tools Tuoi Tre contacted was Hoa, who makes crossbows for his own use and to sell to others.

“This is a kind of dangerous toy that is very difficult to be imported into Vietnam,” Hoa said, adding that he required an advance payment of 50 percent from those who wanted to buy it.

The Tuoi Tre correspondents also met Duy, another trader offering crossbows for sale that had been imported as sporting tools.

Duy said he offers sets of crossbows, arrows and accessories imported from South Korea and Mongolia for up to VND17 million ($762) each.

He added that he provides such bows for buyers in different provinces and cities in Vietnam and said delivery is made after he receives payment from the purchasers.

Importing such lethal tools is not easy at all, Duy said, adding that he was able to import them thanks to his “circle of acquaintances.”

These crossbows and blowguns are among a number of lethal tools that are banned from trade, Major Ho Anh Quoc, the Ho Chi Minh City Police Department, told Tuoi Tre, citing the Ordinance on Management and Use of Weapons, Explosive Materials and Support Tools.

Violators of the ordinance are subject to administrative or criminal treatment, depending on violation levels, Major Quoc said.

The department recently conducted multiple campaigns calling on the public to submit dangerous weapons and tools to authorities who will organize the destruction of such items.