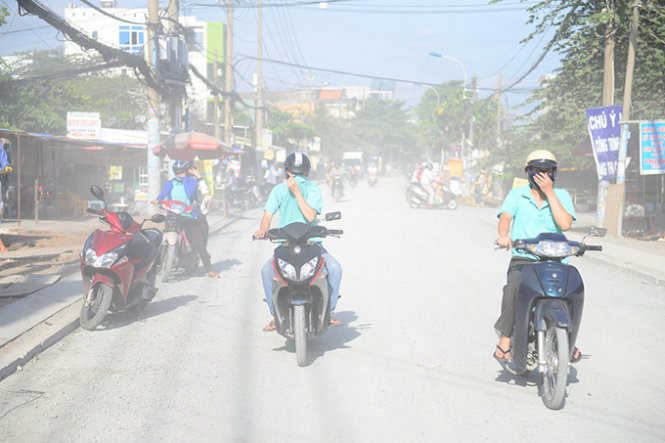 Those living in Ho Chi Minh City suffer not only dust pollution but also noise and the toxic carbon monoxide (CO) gas, experts have said, citing figures from the local Environmental Observation and Analysis Center.

The average dust concentration in the air in Go Vap District in the first six months of 2015 was measured at 496.08 micrograms per m³, higher than the 446.75 micrograms per m³ on average in 2014, according to the center’s statistics.

On Huynh Tan Phat and Nguyen Van Linh Streets, the average dust concentration in the January-June period was 613.83 micrograms per m³, much higher than the 2014 average of 486.67 micrograms per m³.

These readings are much higher than the acceptable level of 300 micrograms per m³ as stipulated by the Ministry of Natural Resources and Environment.

Meanwhile, the same six months saw an average CO content in the air reach 6.03mg per m³ in the Hang Xanh area in Binh Thanh District, compared to last year’s average of 5.61mg per m³.

In Go Vap District, the CO average amounted to 15.98mg per m³ in the same period, which is the highest ever recorded in five observation sites in the city and is far higher than the 11.10mg per m³ last year.

The acceptable CO level is 30mg per m³, according to the Ministry of Natural Resources and Environment.

When one breathes in carbon monoxide, it enters their bloodstream and mixes with hemoglobin, the part of red blood cells that carries oxygen around their body, to form carboxyhemoglobin, Dr. Ba said.

When this happens, one’s blood is no longer able to carry oxygen, and this lack of oxygen causes their body’s cells and tissue to die, he added.

When it comes to noise pollution, the noise level in the Phu Lam area in District 6 was measured at 76.1 decibels (dB) on average in the January-June period, while it was only 70.5 dB during the same period last year.

In Go Vap District, it was much noisier as the level amounted to 78 decibels on average, seven decibels higher than that in 2014.

The acceptable noise threshold is 70 dB, according to the Ministry of Natural Resources and Environment.

Dr. Nguyen Dang Tuan, former president of the Ho Chi Minh City University of Natural Resources and Environment, said that the city has failed to achieve its targets of improving air quality.

Excessive noise seriously harms human health and interferes with people’s daily activities at school, at work, at home and during leisure time, according to the World Health Organization (WHO).

It can disturb sleep, cause cardiovascular and psychophysiological effects, reduce performance, and provoke annoyance responses and changes in social behavior, the WHO said.