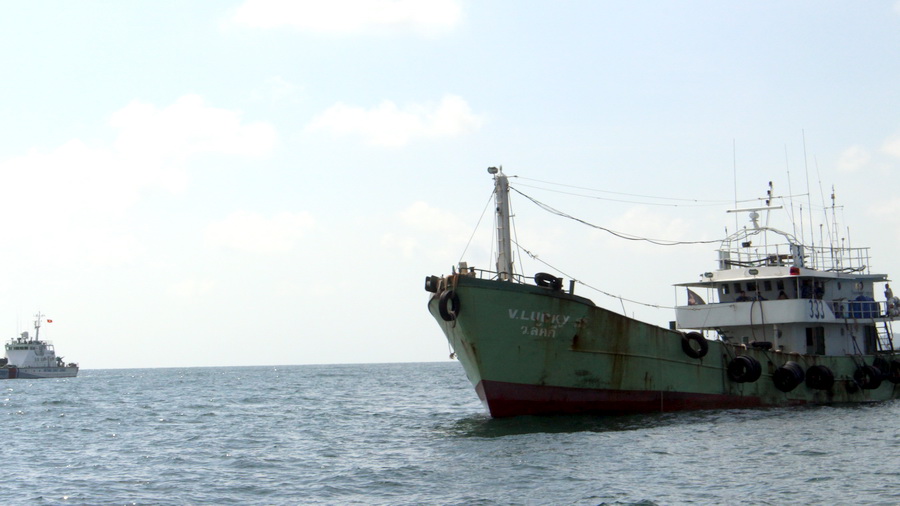 The High Command of the Vietnam Coast Guard of Zone 4 is handling a case in which an armed foreign vessel was found to be unlawfully selling oil to a Vietnamese ship off southwest Vietnam on Sunday.

At 9:30 pm, local coast guards detected the ship V. Lucky with five Thai crew members on board illegally selling diesel to a Vietnamese fishing vessel coded BV-50048TS in the waters between Vietnam and Indonesia.

The scene of the smuggling is off Phu Quoc Island, administered by the Vietnamese province of Kien Giang.

At the time, the foreign boat was carrying about 170,000 liters of diesel, and there were three fishermen aboard the local vessel.

The coast guards sent two ships to the scene to cope with the situation.

Coast guard officers detected a Thompson gun and 17 bullets on board the foreign ship while also discovering a fake foreign ship registration number plate, “R.M SINAR 144,” on the local vessel.

The Vietnam Coast Guard of Zone 4 said it has discovered many cases of illegal oil and petrol trade in the country’s southwestern waters recently, but this was the first time that it had caught an armed foreign ship in the act.

The case has been reported to the High Command of the Vietnam Coast Guard headquartered in Hanoi, coast guard officers said.

Under the direction of the High Command, officers have escorted both ships involved in the smuggling to Phu Quoc’s An Thoi Port for handling in accordance with applicable regulations.