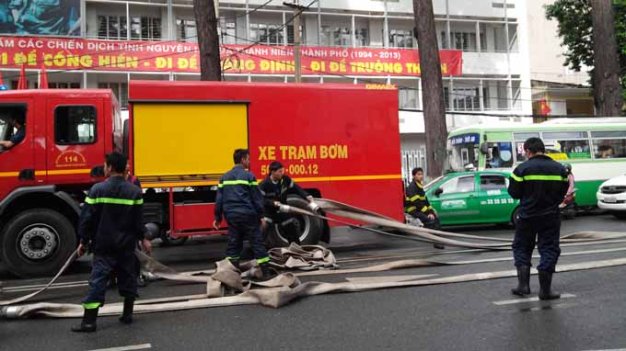 Three streets in central Ho Chi Minh City will be shut down on two separate days this week to serve a fire drill, and the municipal Department of Transport has published a detailed map of alternative routes to help people avoid the bottlenecks.

The drill, whose rehearsal is scheduled for Thursday, will officially run on Saturday at Vincom B, a luxury apartment-trade center complex on Dong Khoi Street, District 1.

The emergency practice will be carried out based on a simulated situation that the Basement B3 of Vincom B catches fire due to a gas explosion in the food court, while a flat on the 26th floor also bursts into flames.

Some 2,000 people from the police, firefighting, healthcare, power supply and military units will join the drill to rescue 700 people involved in the serial fires and explosions, according to the transport department.

The rehearsal and official practice will both take place from 8:00 am to 10:30 am, during which parts of Dong Khoi, Ly Tu Trong and Le Thanh Ton Streets will be barricaded.

On Dong Khoi Street, roadblocks will be put on the section between the crossroads with Nguyen Du and Le Loi.

The Department of Transport suggests the following alternative routes:

For those who need to travel on Dong Khoi Street:

For those who need to travel on Ly Tu Trong Street:

For those who need to travel on Le Thanh Ton Street:

The drill will be jointly held by the Ho Chi Minh City administration and the Ministry of Public Security.

Below is the detailed map of the alternative routes provided by the Department of Transport. For a full-size image, click on the map.