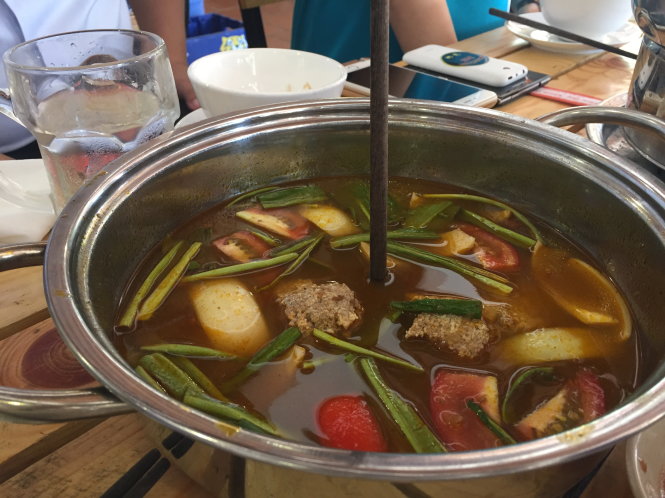 A restaurant in Ho Chi Minh City has been accused of serving a group of diners a crab hotpot containing a large rat, and is calling on authorities to look into what it says is a false allegation.

On November 21, a woman named T. L. H. Tr. posted a photo showing a rat lying at the bottom of a bowl on her Facebook account, plus a lengthy caption explaining the shocking picture.

Tr. said the rat was found by her family when they finished eating the crab hotpot at the Lau De & Cua 245 (Goat and Crab Hotpot) in Phu Nhuan District the night before.

The family members had been enjoying the food until they “found a dead rat at the bottom of the pot after eating all the vegetables and broth,” according to the viral Facebook post.

“When my uncle reported the incident to the restaurant manager, he apologized to us and said we would not have to pay for the meal,” the post reads.

“When my uncle asked him about the possibility of food poisoning, the manager appeared very angry, while the chef alleged that it was us who put the rat into the hotpot.”

In the end, the diners agreed to pay half the bill because they “did not want to argue.”

However, their story is quite different from that told by Ly Trieu Van, the restaurant owner, who was contacted by Tuoi Tre (Youth) newspaper on Tuesday.

Van confirmed that there was a rat found in the pot of a group of 18 diners on November 20.

“However, the rodent was found in full shape, rather than stewed,” he said.

Van said footage from a surveillance camera shows that the diners had been enjoying the meal normally until a group of women left and there were only a few men at the table.

“After a while a man also left the table and then returned around two minutes later, when he called over the manager to complain about the rat,” Van said.

The restaurant owner said it was impossible for a rat to remain invisible until the pot was emptied, as the level of the broth was only 2cm, while the rodent measured around 12cm.

“It is impossible that they did not see the rat when they began eating the hotpot,” he said.

“If the rat had been in the hotpot during the cooking process, it would have been stewed.”

Van said he is working with relevant authorities to clarify the issue.

The Facebook account of T. L. H. Tr. was deactivated when Tuoi Tre attempted to reach her on Tuesday afternoon.

Loc, the restaurant manager, said he had agreed to sign a written guarantee that the eatery would be fully responsible if any of the diners suffered food poisoning.

The manager also asked for the mobile phone numbers of the customers, but they refused to give them, he said.

“None of the diners have returned to ask for compensation since the incident happened,” Loc added.