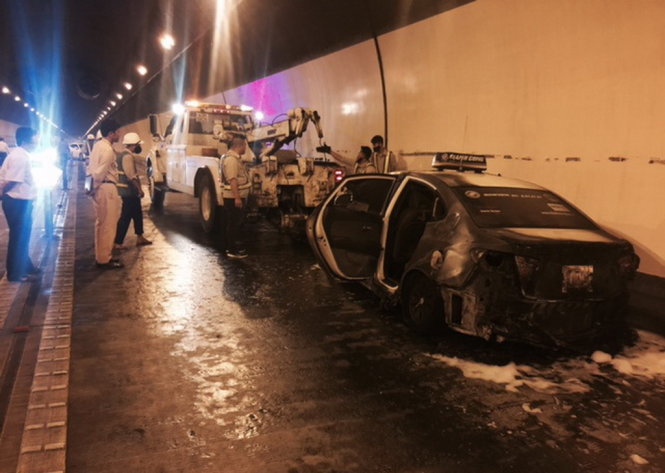 A taxi caught fire and was then burnt very seriously when running through the Hai Van Tunnel in the central city of Da Nang on Friday night, causing traffic congestion lasting 80 minutes there.

The hold-up, affecting around 300 vehicles, was partly caused by the blockage of the tunnel and many other vehicles trailing the taxi that broke the rule by making a U-turn inside the passage after their drivers realized the cab was on fire.

The cab, driven by Nguyen Van Khanh from the central city of Hue, was on its way from Da Nang to Hue and the location where it caught fire was around 1.7 kilometers away from the other end of the tunnel.

The blaze immediately triggered the fire alarm system inside the Hai Van Tunnel, prompting three teams of firefighters and rescuers to quickly approach the scene from one end of the tunnel and another group of medical staff on an ambulance to arrive from the other end.

As reported by the management of Hai Van, when the fire broke out, there were 25 vehicles stuck in the tunnel, and they were instructed to make their way out via a smaller exit.

But the rescuers said it was hard to reach the fire and help the others to move out due to the extent of the flames, smoke and a heavy traffic flow through the tunnel.

So the rescue force had to access from the emergency passage to save 150 people and led them out of the tunnel to safety, said Cao Ba Giang, deputy general director of Hai Van Pass Tunnel Management and Exploitation JSC.

By 12:30 am on Saturday, after the fire was extinguished, the taxi was successfully towed out of the tunnel and the blockage was lifted.

Police officers are investigating the cause of the blaze.