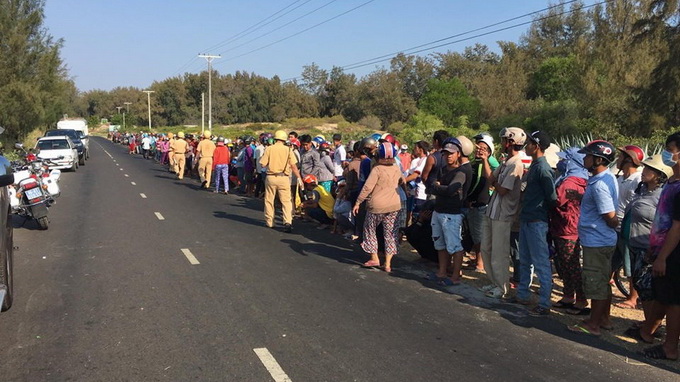 An 11-year-old boy was kidnapped for ransom and later killed in the coastal province of Binh Thuan in south-central Vietnam, local police announced Wednesday.

The kidnapper was identified as 23-year-old Nguyen Thanh Vu, the victim’s neighbor and an employee working for the dragon-fruit farm run by the boy's family.

According to initial reports, N.’s parents first became alarmed when he did not return home after martial arts class.

That evening, the family received a text message demanding a ransom of VND200 million (US$9,000). The message threatened that the boy would be killed if police were notified.

After some negotiations, the kidnapper demanded an initial amount of VND70 million ($3,200) be brought to a local shophouse, claiming the hostage would be released at a nearby location after the money had been received.

The shophouse in Tuy Phong District, Binh Thuan Province, where the kidnapper told the victim’s family to bring the ransom money to. Photo: Tuoi Tre

The victim’s family left the sum of money at the designated destination as requested, but did not find their son where the kidnapper said he would be set free.

On April 5, the kidnapper contacted the family to demand that the remaining VND130 million ($5,800) be brought to a hotel in Phan Thiet City, about 90 kilometers away from Tuy Phong District.

When the family arrived at the rendezvous point, the kidnapper’s number could not be reached.

The hotel in Phan Thiet City, Binh Thuan Province, where the kidnapper told the victim’s family to bring the ransom money to. Photo: Tuoi Tre

The boy’s body was later found at a beach in Binh Thanh Commune in Tuy Phong District.

Nguyen Thanh Vu admitted to the crime at the police station, stating that he had abducted the kid for ransom, but later killed the boy for fear of being discovered.

Vu said he had asked the victim’s father, Phan Khac Dung, for some money one week earlier to pay off his betting debt, but the father refused.

According to Vu’s statements, he abducted N. in his martial arts class by telling the boy that his parents had asked Vu to take him home.

Upon realizing that Vu was not heading home, N. started crying and resisting, so Vu pulled off at the secluded beach of Doi Duong and dragged N. into the roadside woods.

The man admittedly strangled N. with the belt taken from the boy’s martial arts uniform, and then buried his body at the site.

Inspections at the place where the victim’s body was found have been carried out by Binh Thuan Police since early Thursday.