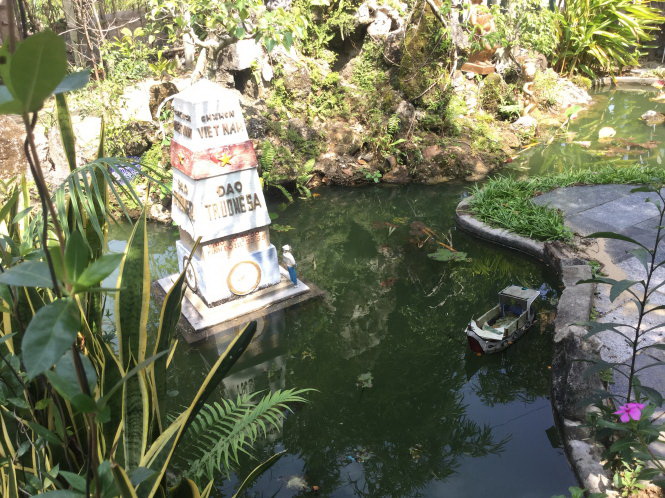 An elderly, semi-retired farmer has built a monument in his own garden in Hoi An City that expresses his full support for Vietnam’s sovereignty over the Truong Sa (Spratly) archipelago.

While many Vietnamese people choose to build rockeries in their gardens, Nguyen Chi, a 62-year-old farmer from Cam Ha Commune in Hoi An City, Quang Nam Province, has adorned his home with a monument that evidences his love for the country.

The central province of Quang Nam is home to the UNESCO-recognized Hoi An Ancient Town, a part of Hoi An City, and other tourist attractions including the Tra Que vegetable village.

Chi, who only completed his education to a third grade level, has created a Vietnamese ‘map’ dotted with a lake suggestive of the East Vietnam Sea, and a Truong Sa memorial featuring a gun-wielding navy soldier.

He has also erected a lean-to, where he usually sits and welcomes local students and passing tourists, including many foreigners.

“Today’s youngsters tend to be oblivious to the majesty of their own country,” he explained. “Hopefully my structure will give them a better idea.”

The idea of erecting the structure came to Chi in May 2014, when he was listening to news regarding China’s illegal deployment of an oil rig in Vietnamese waters.

Baffled by a neighboring child’s questions about Truong Sa’s location, he was set on finding out more about the high-profile archipelago.

The poorly-educated old man then meticulously noted down pages of archives which he found barely intelligible, and cut out newspaper articles on the topic. Gathering sufficient information on the archipelago, he set about erecting the memorial and the ‘sea’ himself.

Chi has also marked the location of the Hoang Sa (Paracel) archipelago on the ‘sea’ surface, but he cannot erect a similar memorial until he has gathered adequate information on the other well-known group of islands.

“A country’s milestones are momentous and sacred, and must be re-created with great effort and utmost precision,” he stressed.

Chi’s unique structure, expressing his profound patriotism, has aroused curiosity among passers-by and tourists, particularly foreigners, who stop for photos and listen to the old man’s stories and explanations of the two archipelagoes.

Well known in the area, many years ago, Chi went to great lengths to reclaim wastelands and grow his own sweet potatoes.

He also hoed a trail for students in the neighborhood to walk to school before the local government built a road in 2000.