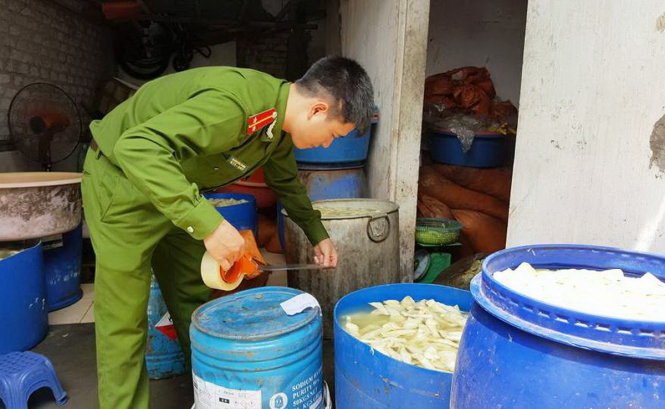 Senior Lieutenant Colonel Nguyen Viet Nhi, deputy chief of the environmental police department of Nghe An Province, said on Wednesday that his unit had opened an investigation and restricted operations at two bamboo shoot firms in the provincial capital city of Vinh.

There were about 14 metric tons of rotting bamboo shoots in the Son Hanh warehouse, according to a police probe. The state of the bamboo has led investigators to believe the shoots were harvested between six months and one year ago.

Son confessed to authorities that his facility had used whitening agents to freshen the bamboo shoots and stained them with a yellowish artificial coloring agent, suspected to be diarylmethane (auramine O).

Nhi said that the chemical samples had been sent to Ho Chi Minh City for examination and toxicity testing, adding that the department confiscated a combined 25 metric tons of bamboo shoots from the two facilities for further investigation.

The chemical substances utilized by the producers are prohibited from being used for food processing, according to the senior lieutenant colonel.