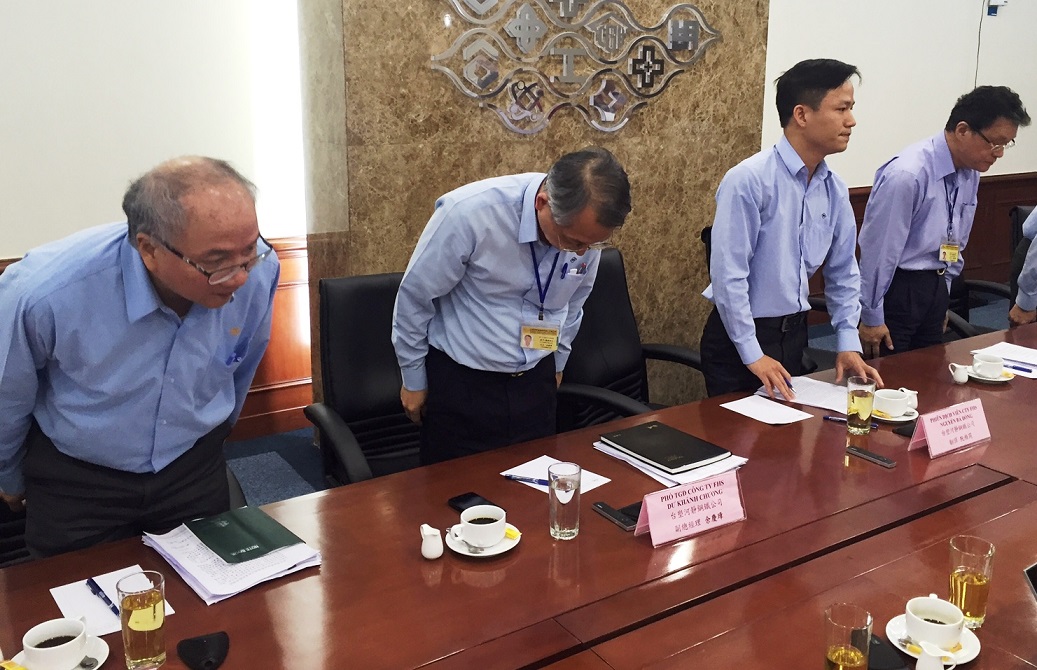 Leaders of the subsidiary of Taiwanese corporation Formosa in the north-central Vietnamese province of Ha Tinh have apologized for a shocking statement made by one of its executives on Monday, before abruptly ending a press conference, leaving many questions unanswered.

A meeting with media was organized by the Formosa subsidiary on Tuesday afternoon to address the remarks of the head of its Hanoi office Chou Chun Fan, and to explain issues regarding the firm’s wastewater treatment.

The conference was chaired by Truong Phuc Ninh, the company’s CEO, along with other high-ranking managers, and attended by nearly 100 reporters, all eager to report on the matter for their readers.

Formosa has been under fire from the public following Chou’s statement during an interview with local media on Monday.

The company executive said that the Vietnamese authorities must decide whether to “catch fish and shrimp, or to build a modern steel factory.”

“You win some, you lose some. Even if you are the prime minister, you cannot choose both,” Chou said.

According to Ninh, Chou's statement was wrong and did not represent the viewpoint of Formosa.

“We would like to extend our sincere apology to the Vietnamese government and people,” the CEO said.

Responding to the reporters’ questions about whether the company is to blame for mass fish deaths in the central provinces of Ha Tinh, Quang Binh, Quang Tri, and Thua Thien-Hue, Ninh suggested that people should wait for the results of an investigation by "competent authorities."

“We hope that the Vietnamese authorities will soon reveal the cause of the deaths in order to appease the public’s suspicion,” he stated.

Tuoi Tre (Youth) newspaper journalists brought up the question of why the Formosa subsidiary did not notify local authorities prior to the firm’s most recent pipeline system cleaning.

It is compulsory for businesses in Vietnam to issue advanced notice to local authorities about their pipeline cleaning activities as per regulations, according to Phan Lam Son, deputy director of the Ha Tinh Department of Natural Resources and Environment.

However, the company leaders appeared to dodge the answer by directing the attention to their US$45 million wastewater treatment system, adding only that they always complied with the Vietnamese law on environmental protection.

At the end of the press meeting, Chou also said sorry for his controversial action.

“I am Chou Chun Fan. My statements, which were not authorized, have raised fierce opposition from Vietnamese citizens. I sincerely apologize for that,” the executive said before quickly exiting the room.

Thirty minutes into the press meeting, the company leaders all stood up and apologized before suddenly terminating the talk despite relentless questions from local reporters.

“We cannot continue to answer all of your questions due to an urgent company meeting. All remaining enquiries should be noted down and sent to our representatives, and shall be replied to on another occasion,” one of the company leaders said.

Many attending correspondents expressed their dissatisfaction with the way the meeting ended.

“Many questions on whether Formosa is responsible for the mass fish deaths have not been answered. This should not be considered a press meeting,” Minh Thuy, a reporter from Tien Phong (Vanguard) newspaper, said.

Explaining the absence of Ha Tinh officials at the meeting, Phan Tan Linh, director of the provincial Department of Information and Communications, stated that to invite authorities or not was the firm’s decision as it was considered a normal company press meeting.