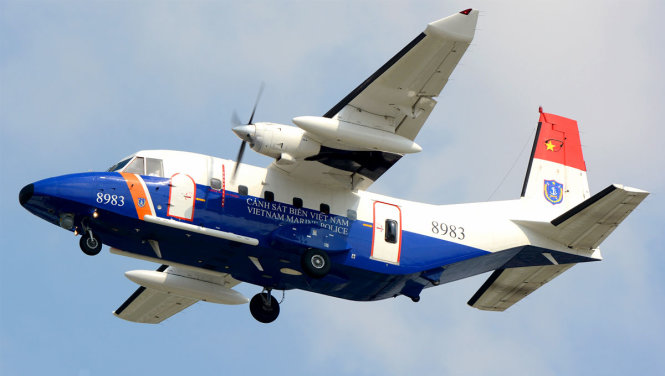 As of Saturday, more than 750 military personnel have been dispatched to search for a coast guard aircraft that disappeared during a search mission for the missing pilot of a crashed Russian-made fighter jet earlier this week.

Besides 764 military officers and soldiers, 49 boats of all kinds and numerous equipment pieces are being used for the search and rescue efforts for the missing CASA-212 aircraft, according to the office of the National Committee for Search and Rescue.

CASA-212 had been dispatched to search for Su-30MK2, a Vietnam People’s Air Force’s fighter jet that crashed during a training session on Tuesday morning, but ended up becoming a target of another search mission.

The Spanish-made aircraft, carrying nine members of the search crew and captained by Colonel Le Kiem Toan, lost contact at around 12:30 pm that day while flying 44 nautical miles southwest of Bach Long Vi Island off the northern city of Hai Phong.

One of of the Su-30MK2, Tran Quang Khai, died from the crash, with his body already retrieved and taken ashore for burial. The other pilot, Nguyen Huu Cuong, was rescued alive on Wednesday.

Some pieces of debris believed to be of the CASA-212 have also been found, whereas the fate of its nine-member crew remains unknown.

The wreckages of both planes have yet to be found.

Three vessels of the Vietnam Maritime Search and Rescue Coordination Center are scouring the sea north of Bach Long Vi to look for the CASA-212, whereas vessels of the military units of Hai Phong and the neighboring province of Quang Ninh are searching in the area southwest of the island.

The Vietnamese coast guard also dispatched its CSB 4039 ship, carrying 27 officers from the air and navy forces, as well as civil aviation, to join the search effort for the CASA-212.

The administrations of the coastal provinces from Quang Ninh to Ninh Binh have also notified local fishermen to pay attention to the waters where they are fishing.

China have also joined the search with two search and rescue boats, two coast guard vessels, four naval ships, and two helicopters, all of which are now scouring the sea southeast of Bach Long Vi.

As of the end of Saturday, no positive results were recorded from the search missions.

In the meantime, three vessels are still searching for the wreckage of the Su30-MK2 in the waters east of Mat Island, off the north-central province of Nghe An, where the fighter jet crashed, but have so far found nothing.