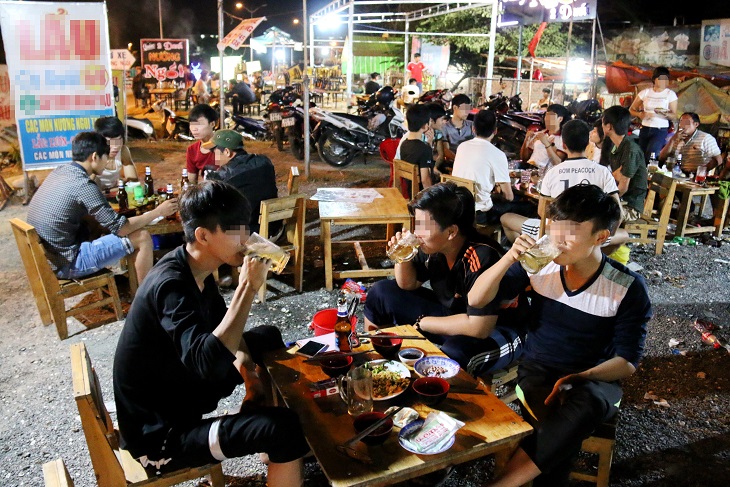 Police in Ho Chi Minh City have proposed a ‘curfew’ be imposed on the opening hours of beer bars across the city in the hope of reducing the number of criminal offenses committed under the influence of alcohol.

Colonel Tran Duc Tai, deputy director of the municipal Department of Police, presented the proposal on Monday afternoon during a regular meeting to review the socio-economic status of the southern metropolis during the first six months of the year.

The number of criminal violations in the city has been decreasing, Col. Tai said before highlighting a trend in the type of offenses, namely murder and assault, committed by people affected by alcohol.

“A study should be carried out by competent authorities to determine suitable closing hours for beer clubs. It has been too easy to open such a venue, where several gangs have gathered and created social disorder,” the police official explained.

“The recommendation is expected to contribute to a reduction in criminal offenses in the southern hub,” he added.

According to Col. Tai, many illegal gangs from northern localities have been migrating to Ho Chi Minh City, operating under the cover of pawnshops, discos, and other businesses.

Officers have recently inspected 30 pawnbroking shops in the city, all of which have had violations recorded against them, reflected in a rise in crime rates of up to 150 percent per month, he said.

Over 1,700 traffic accidents have been recorded in the first six months, killing more than 700 people, which was a big number even for a metropolis like Ho Chi Minh City, the police deputy continued.

An increasing number of crashes were attributed to pedestrians, Tai affirmed, saying that authorities should raise awareness of traffic regulations.

Managing order on the city’s sidewalks and ensuring sufficient space for pedestrians should also be focused on, he added.

Regarding the city’s economic status, there was a 35 percent decline in foreign investment in the first half of this year, although a total of 367 new projects were licensed, with a combined capital of US$515.1 million.

According to Nguyen Thanh Phong, chairman of the municipal People’s Committee, the Department of Planning and Investment should take responsibility for the drop.

Chairman Phong also ordered authorities at district and ward levels to expedite administrative procedures with regard to citizens’ safety.