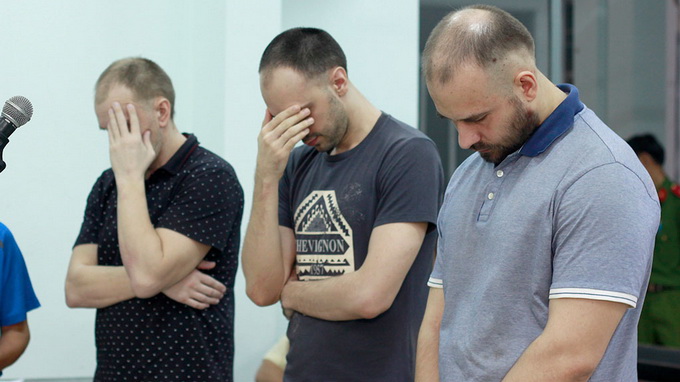 Three Russian men were sentenced to six years behind bars on Wednesday for using fake cards to withdraw money from ATMs in southern Vietnam.

Russian nationals Troian Aleksei, Kotets Viacheslav, and Bondarenko Yury were tried on Wednesday by the People’s Court of Khanh Hoa Province in south-central Vietnam on charges of “employing computer networks, telecommunication networks, the Internet, or other digital devices for the appropriation of properties.”

The trio got six years each for the crime, while Aleksei received an additional six months for an attempted jailbreak during detention.

According to the indictment, in 2015 Yury was asked by fellow countryman Kostya Nabiulin to join the latter in a scheme to withdraw money from automated teller machines (ATMs) using stolen bank account information stored on fake cards.

Yury agreed, and was taught to make bogus bank cards by a man named Michael.

Aleksei received a similar invitation in September 2015 from a man named Armen, who gave him 20 bank cards and PIN codes.

Troian was also provided with the e-mail address of Andrei, a distributor of stolen bank information, for emergency contact, and was asked to join Viacheslav and Yury in Vietnam to carry out the scheme.

Viacheslav and Yury entered Vietnam on October 14, 2015, and began loading account information provided by Nabiulin on to blank cards.

From October 20 to 27, Viacheslav and Yury used counterfeit cards they received from Armen and Yury to withdraw a total of VND294 million (US$13,125) from multiple ATMs in Ho Chi Minh City and Khanh Hoa.

At around 7:00 pm on October 27, Aleksei was caught red-handed using a bogus card to withdraw money from a Bank for Investment and Development of Vietnam (BIDV) ATM on Ngo Gia Tu Street in Nha Trang City, the capital of Khanh Hoa.

Viacheslav and Yury were also apprehended shortly after.

During his detention, Aleksei attempted a jailbreak using items available in his cell at 0:45 am on February 12, 2016.

On Tuesday, two Turkish nationals were also sentenced to five years each on similar charges.