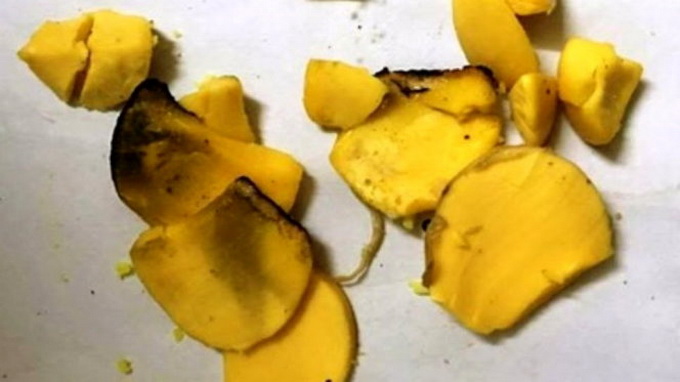 A woman in north-central Vietnam has recorded herself slicing and burning an egg yolk bought from a local eatery amid suspicion that the egg was made of rubber.

Le Thi H., from Vinh City in Nghe An Province, said she was contacting local authorities on Monday to report suspected fake eggs she had bought.

According to H.’s statement, she was having dinner with her daughter at a diner on Le Hong Phong Street in Vinh at around 7:00 pm on Saturday when she noticed the unusually smooth texture of the sliced egg yolk in her daughter’s bowl of porridge.

The egg yolk in question is an ‘immature egg’, or a yolk that was still attached to a hen’s ovary at the time of cooking, a common side dish for boiled chicken in Vietnam.

Suspecting that the yolk was fake, H. stopped her daughter and bought a few immature eggs from the same eatery to bring home as evidence.

“When I tried to slice the egg with a knife, the egg didn’t crumble like normal hard-boiled eggs, but was elastic like rubber,” H. recalled.

H. went on to use a lighter to burn the egg, which then started to burn and smell like burnt rubber, according to her description.

All of it was recorded on tape, which also showed H. slicing the yolk of what she said was a “normal egg.”

However, the ‘normal’ yolk H. used for comparison in her ‘experiment’ was from a laid egg, while the yolk she had bought from the diner was an immature egg.

“This is the first time I have seen such a strange egg. I wonder if it’s a real egg or made from rubber like those Internet rumors,” H. said on the tape.

According to an official from Nghe An market watchdog, the body has not received any formal report on the incident.