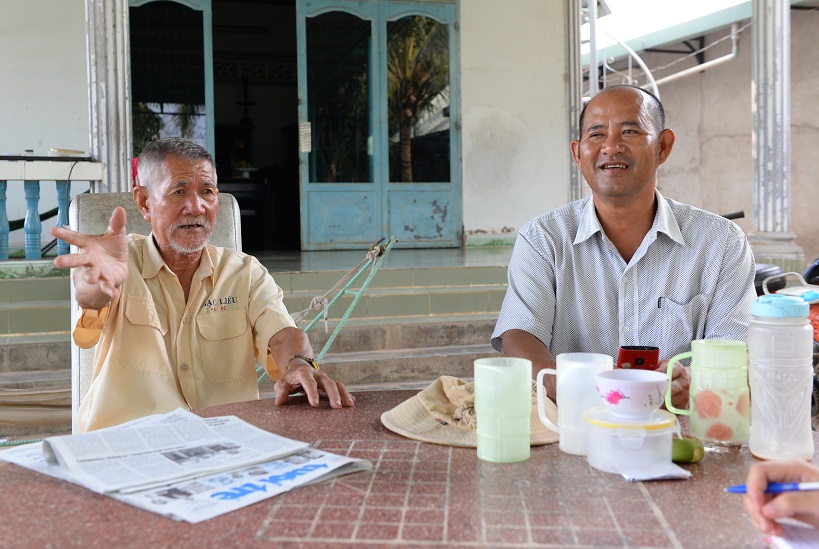 A man and his son in Ho Chi Minh City have been praised by local residents for their bravery in the fight against sand thieves over the past few years.

Nguyen Van Pho, 75, and his son, 46-year-old Nguyen Tuan Hai, residents in District 9, have been battling sand theft in the area to protect the property of citizens living along the Dong Nai River.

Several locals have been left devastated and helpless while their real estate vanishesbefore their eyes as thieves steal the sand out from under them.

“Some married couples bought land plots a long time ago but after saving enough money to build a house they discovered that their land had totally disappeared,” Hai said.

The father and son due stated that about 20 local residents have lost property to the thieves, but hesitated to react to the illegal activities out of fear.

According to L.T.H., one of the victims, the thieves are very aggressive and willing to attack those who interfere with their wrongful operations.

“I am very concerned over Hai’s wellbeing during his 1 or 2:00 am patrols. The sand thieves have rammed Hai’s boat and knocked him overboard several times,” H. said.

T.V.T., the pair’s neighbor, considered Hai one of the bravest in the neighborhood and the only one that dares to stand up against the offenders.

Pho recounted that he began his fight against the sand stealers in 1976 when he was voted head of the local neighborhood watch.

As the value of sand rose, people from the neighboring Binh Duong, Dong Nai, and Long An provinces began moving to the Ho Chi Minh City suburbs to collect the valuable commodity.

Pho himself became a victim after thieves removed land in 2010 that had been passed onto him by his family back in 2010, sparking his concern for local residents going through the same situation.

The vigilante’s patrols often take place at night, when the violators are most active.  Though usually he work’s alone, Pho is joined on some rare occasions by neighbors.

“Following my report to local authorities, the thieves were slapped with a fine but soon reverted back to stealing,” Pho said.

He recounted a time when he was pursued and attacked by the criminals but managed to escape by quickly reaching the river bank.

However, though he made a narrow escape that night, his boat was found on sunk on the riverbed the following morning.

“I am not afraid and I do this for other people. I might be risking my life but I could never let them get away with their crimes,” Pho asserted.

Hai joined his father in the endless battle in 2006, stating that his latest encounter with the sand thieves was three months ago.

“I was verbally threatened and later fell into the water after they rammed into my raft,” Hai recalled.

Despite knowledge of the illegal operations, Hai is sometimes unable to stop the thieves due to his limited authority and strength.

Hai currently works as a wherryman to provide for his wife and son, who support his efforts despite their concern for his safety.

Aside from the threats, the sand thieves have tried to tempt Hai and his father into work for them with the promise of making a small fortune.

“I will never accept their offers. The people here had to work really hard to afford their land,” Hai stated.

Pho has relayed the situation to the local Office of Natural Resources and Environment and the municipal Party Committee, but no changes seem to have been made.

He has encouraged local residents to sign a petition for a firm solution to the problem.

Hai has also provided important information to local press and assisted journalists in documenting the issue.