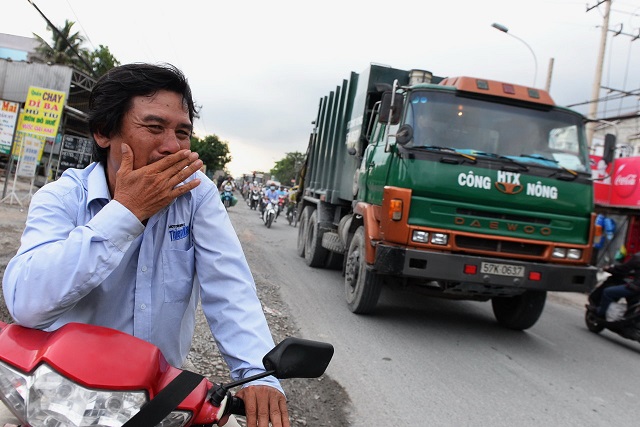 Ho Chi Minh City aims to plant more trees in a bid to combat the unpleasant odor drifting over from a major waste treatment complex plaguing the southern-end of the city.

During a regular press conference on Thursday afternoon, Vo Van Hoan, head of the office of the municipal People’s Committee, officially confirmed that the Da Phuoc Solid Waste Treatment Complex in Binh Chanh District was responsible for the stink blanketing southern neighborhoods.

Garbage buried underground and wastewater stored at the Vietnam Waste Solutions Corporation, both located inside the treatment zone, are the two primary sources of the stink.

According to the report made by the city’s administration, the waste treatment zone receives about 5,400 metric tons of rubbish from 16 of the 24 districts in the southern metropolis.

The facility has so far collected nearly 11 million metric tons of waste that has been buried underground for disposal in an 88 hectare area.  Meanwhile, the dump has been piled 25 meters high with garbage.

The venue is designed with a 25 million metric ton waste capacity and can support garbage piling up to 40 meters high.

332 hectares of land surrounding the landfill will be zoned for the planned trees.  The primary hope is that the trees will help minimize the effects of the smell on the area.

The municipal Department of Natural Resources and Environment and authorities in Binh Chanh District have been ordered to encourage local residents to contribute their efforts to in growing the trees, thus relieving pressure on the city budget.

“The solution cannot permanently eliminate the smell but is hoped to help purify the atmosphere,” Hoan said.

Other short-term measures include the close monitoring of rubbish transport and operations at the waste treatment complex.

Regarding a long-term solution, the city will seek to replace the current method of burying waste with more viable and modern technology.

Construction of a waste treatment project in the neighboring province of Long An will also be expedited to help relieve the pressure caused by the increasing volume of waste in the southern city.