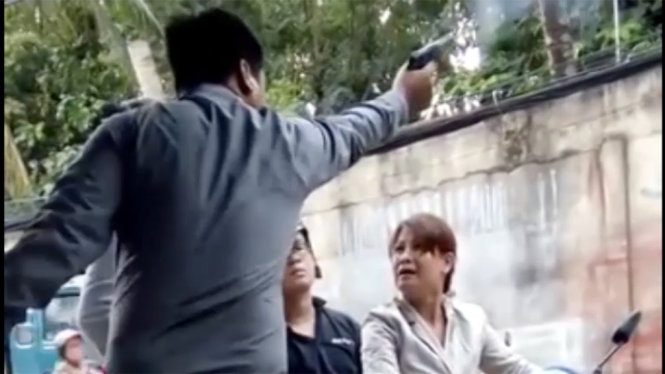 Ho Chi Minh City police are looking into the authenticity of a viral video showing a man, believed to be the director of a security guard company, firing a handgun to threaten a woman during an argument, a source told Tuoi Tre (Youth) newspaper on Tuesday.

The shooting was reported to have occurred on Monday in front of the office of the firm on Cong Lo Street, Ward 15, Tan Binh District.

In the footage lasting two minutes and eight seconds posted on Facebook, the man was seen having a quarrel with a woman.

They were exchanging swear words when the man pulled a handgun from his pocket and pointed it at the woman’s head.

The man fired the gun elsewhere and went away, despite the woman challenging him to “shoot me in the head.”

“Why did you shoot the road?” the woman exclaimed.

Their row then continued to escalate, with the man pointing his fingers at the woman and kicking her.

They were heard heatedly quarreling over the man’s salary debt to the woman’s child.

A boy was seen sitting on a motorbike behind the woman while the man’s wife was standing nearby. Neither interfered in the row.

Tuoi Tre reporters made phone calls to the mobile numbers of the firm on Tuesday morning but nobody answered.

By law, civilians are banned from owning, storing or selling guns in Vietnam.