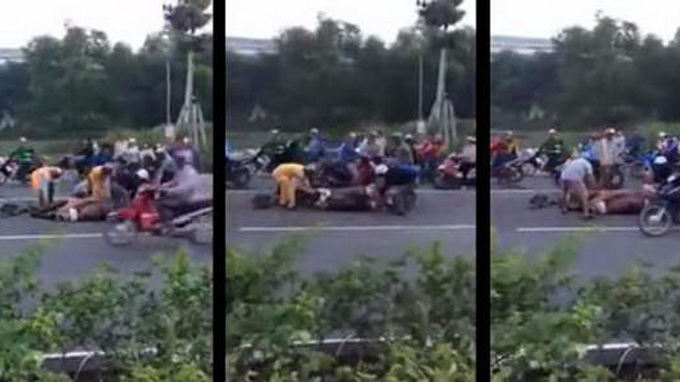 An ill-fated buffalo died twice earlier this week, first when it was crushed by a truck on a highway in southern Vietnam and again when its body was slaughtered by a mob of locals.

A video capturing the ‘buffalo slaughtering on highway’ scene surfaced on YouTube on Monday, and quickly went viral.

The man who filmed the footage said the incident had taken place that day in the southern province of Binh Duong.

The 49-second video sparked ire against the actions of those who ignored heavy traffic to rush onto the middle of a highway with knives in hands, ready to take as much meat from the dead animal as possible.

The ‘meat looters’ ignored loud honking from vehicles wanting to clear the way, and continued with their slaughter.

The video has attracted negative comments from the online community, who said the residents should have taken the buffalo to the sidewalk to avoid blocking traffic.

The looters were also criticized for stealing the buffalo meat without concern for the real owner of the animal. In Vietnam, a live buffalo normally costs at least a few dozen million dong. (VND10 million = US$446)

Still, others say the mob was only trying to help “reduce the weight of the buffalo” by taking away its meat, making it easier to drag the animal off the highway.

The ‘buffalo meat looting’ video adds to a series of recent clips of local residents in different parts of Vietnam taking advantage of the misfortune of others.

In early November, a truck delivering goods to a supermarket in the south-central province of Binh Dinh caught fire and had its merchandise looted by a mob of locals shortly after falling out the burning cabin.