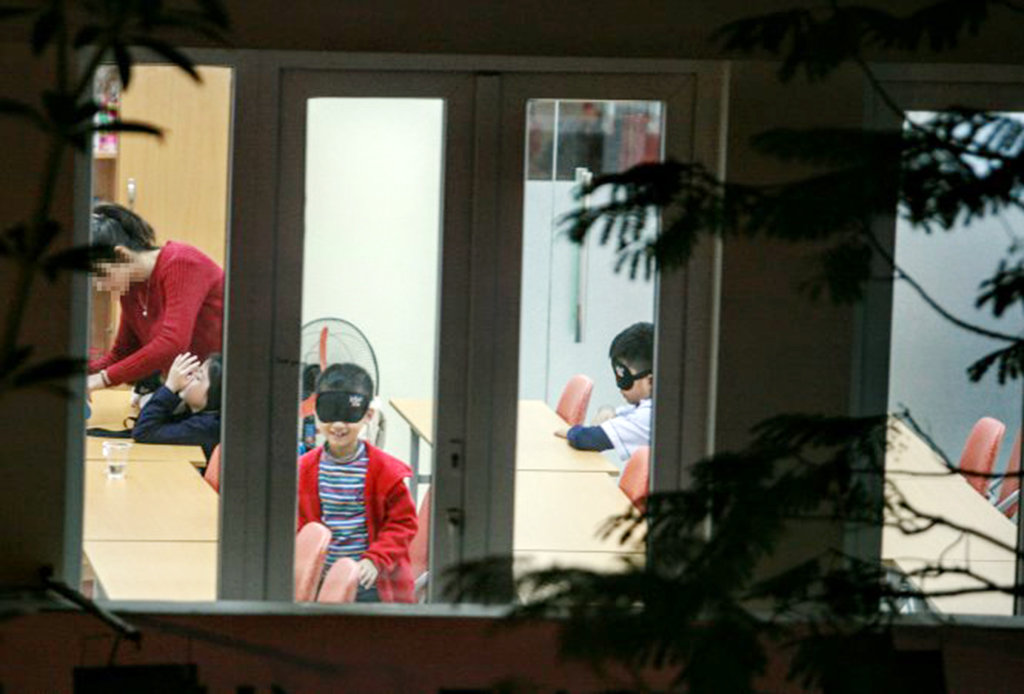 Centers claiming to specialize in midbrain stimulation for children have been growing in Vietnam, attracting parents with the promise of turning their kids into geniuses.

A large number of these centers have been established over the past few months, taking advantage of Vietnamese parents’ wish for their children to become prodigies in a short space of time.

A probe by Tuoi Tre (Youth) newspaper revealed that the ‘genius’ training facilities are mainly located in Ho Chi Minh City and Hanoi, promising exceptional results even after one course of study.

According to their advertisements, learners are said to be able to read numbers and colors, play chess, ride bicycles, and perform other activities with their eyes blindfolded following the method of midbrain activation.

At advanced levels, children will be able to read minds and improve their reading speed and memory by 100 times, the centers proclaimed.

Courses are offered at between VND9 million (US$398) and VND12 million ($530) each, with some centers guaranteeing to refund all tuition if the promised results are not achieved.

A mother from the Central Highlands province of Lam Dong told Tuoi Tre she had signed her child up for a course of midbrain stimulation at a Ho Chi Minh City center, at a cost of about VND3 million ($133).

Such a discounted tuition fee was only offered to learners who registered early, the woman said, adding that the actual price was nearly VND8 million ($353).

During the course, her child was taught to listen to meditative music, she recalled, adding that each trainee was required to listen to the melody for another three to six months after the course in order to sharpen his or her ability.

“I didn’t notice any changes in my son’s results at school. He only said that the music made him sleepy,” the mother said.

According to another parent, she paid some VND2 million ($88) for her daughter to attend a similar class.

The only thing the young girl achieved from the lessons was the ability to guess the number and color of playing cards, the parent said.

During an interview with Tuoi Tre, Deputy Minister of Health Nguyen Viet Tien said that the health departments of Ho chi Minh City and Hanoi have been ordered to inspect the activities of the ‘genius’ training centers.

“The ability to guess numbers and colors of playing cards does not reflect improvements in one’s thinking and memory skills,” Deputy Minister Tien assessed.

The technique is just a trick to impress parents and tempt them to sign their children up for the lessons, the official continued.

According to Thanh Ngoc Minh, a senior doctor from the Vietnam National Hospital of Pediatrics, children can only sharpen their abilities through studying and practice.

Activating their midbrains does not increase their IQ or thinking ability, Dr. Minh asserted.

The method needs to be evaluated and proved in terms of its scientific and moral value, as it is related to the human brain, said To Thanh Phuong, deputy director of the National Psychiatric Hospital.

“Without approval from competent authorities, carrying out such operations is considered a violation of the law and morality,” Phuong stated.