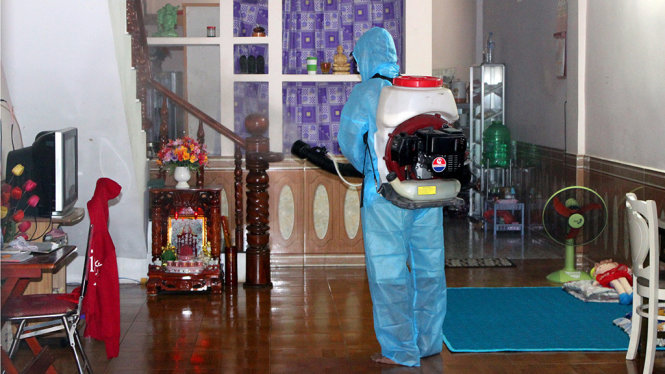 A province neighboring Ho Chi Minh City has been confirmed to be hit by the Zika disease, which can cause microcephaly in newborns, as a pregnant woman tested positive for the virus last week.

On December 3, the health department in Dong Nai Province, which borders the southern city to the east, received a report from the Ho Chi Minh City Pasteur that N.T.H., a 24-year-old pregnant woman in the provincial capital of Bien Hoa, had been infected with Zika.

This is the first Zika infection to have been detected in Dong Nai.

The health department said that H., 29 weeks pregnant, showed symptoms of a fever and pain all over the body on November 27.

She was admitted to a hospital in Dong Nai the following day after developing skin rashes. She was diagnosed with a skin-rash viral fever and given medicines by hospital doctors before being discharged.

On November 30, H. came to the Ho Chi Minh City Hospital for Tropical Diseases for another test, which then returned as Zika-positive.

On December 2, the patient was discharged and has had stable health since.

On November 23, the man displayed signs of a skin rash and pain so he bought some pills to cure himself within three days.

Dong Nai’s health department directed its units to spray chemicals on Sunday to kill mosquitoes and larvae in Block 10, An Binh Ward, where H. is living, to prevent the virus from spreading, Huynh Minh Hoan, director of the agency, said.

Health officials have been required to closely monitor H. and her husband in order to curb any further infections in the area, Nguyen Hoa Hiep, deputy chair of the Dong Nai People’s Committee, said in a meeting on Monday.

Everything is still under control in Block 10, An Binh Ward, Hoan said, adding that pregnant women should visit doctors whenever they have symptoms of a fever, pain, and pinkeye.

Zika is caused by a virus transmitted primarily by the Aedes mosquitoes, according to the World Health Organization (WHO).

People with Zika can exhibit symptoms including a mild fever, skin rashes, conjunctivitis, muscle and joint pain, malaise or a headache that normally lasts between two and seven days, the WHO said.

According to the WHO, there is scientific consensus that the Zika virus is a cause of microcephaly in infants, a birth defect characterized by unusually small heads that can result in developmental problems, and Guillain-Barré syndrome – a neurological disorder that can lead to paralysis and death.

Links to other neurological complications are being investigated, a representative of the WHO added.