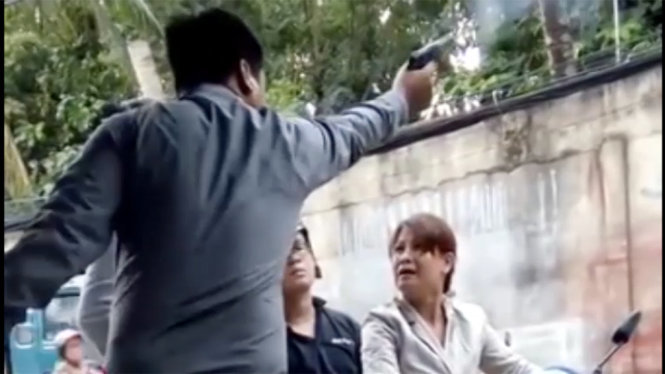 Police have been able to confirm the details of a video clip that went viral on Monday, showing a man opening fire during a heated row with a woman in Ho Chi Minh City.

Tan Binh District police have confirmed that the video was filmed in the district’s Ward 15, and the man, identified as Bui Duc Phuong, is indeed the director of a security firm as reported.

Phuong, director of Viet Nhat Co., was summoned to work with police shortly after the video caused a stir on the Internet.

In the 2-minute long clip, Phuong and an unidentified woman are seen exchanging swear words, apparently over the man’s debt to the woman’s child. The man is also seen pointing his fingers at the woman and kicking her.

In the middle of the argument, Phuong pulls a handgun from his pocket and points it at the woman’s head before opening fire into the air, despite the woman’s challenge to shoot her.

Police say that after working with Phuong yesterday afternoon, the firearm has in fact been confirmed to be a tear gas gun, rather than a firearm carrying lethal ammunition.

Security companies are allowed to use tear gas guns as ‘support tools,’ with Phuong having obtained the correct permit for his.

“However, licensed users of tear gas guns are only allowed to use them for proper purposes, and Phuong has violated the rule in the video,” one Tan Binh police officer underlined.

“Phuong will be held accountable for the improper use of the gun.”

At a press conference following a regular meeting of the Ho Chi Minh City administration yesterday afternoon, the municipal chairman Nguyen Thanh Phong said he was briefed on the incident, adding that the actions of the security firm director are unacceptable.

Phong said his administration were waiting for a more detailed report from the police department before deciding on what action to take against Phuong.

Lawyer Nguyen Duc Chanh, from the city’s bar association, said even though Phuong had opened fire, his actions did not result in any serious consequences.

For that reason, he could face a civil fine of between VND2 million and VND4 million (US$90-$180), and have his gun revoked or suspended from use for between nine to 12 months, according to the lawyer.