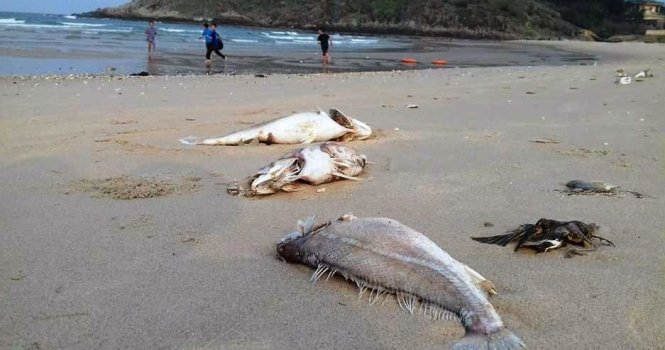 Vietnam’s Natural Resources and Environment Ministry has raised questions among the local community and media for its exclusion of the mass fish deaths, a scandal of unprecedented magnitude striking the central region early 2016, from the year-end list of ten outstanding events.

Tons of dead fish started washing ashore along central Vietnam’s coast between April and May, marking an unprecedented tragic environmental disaster in the country – yet apparently not tragic enough to rank among the list of 2016’s ten most remarkable events relating to natural resources and the environment published Thursday by the ministry.

The absence of the fish death scandal has sent a wave shock through the media and public, considering it is “one of the most severe environmental disasters in Vietnam’s history,” Nhan Dan (People) newspaper reported.

According to the Party-run Nhan Dan, the fish deaths, caused by Taiwan’s Formosa Plastics Group’s steel plant in the north-central province of Ha Tinh, ranked second on the list of ten outstanding environment events by journalists with the Environment Bulletin.

The fish kill was recorded on 200km long of central Vietnamese beaches, affecting millions of local residents and keeping 39,000 fishermen of four provinces, Ha Tinh, Quang Binh, Quang Tri and Thua Thien-Hue, aground for eight months, according to Nhan Dan.

The disaster led to a 20 percent reduction in Vietnam’s seafood production, slowing the country’s GDP growth during the first nine months of last year, the newspaper reported.

Formosa Ha Tinh took responsibility for the disaster, apologized to Vietnamese government and people, and paid US$500 million in damages.

Vu Minh Son, head of the agency in charge of issuing awards under the environment ministry, said the list of ten outstanding events is compiled based on a set of four criteria, none of which was met by the fish death scandal.

In general, an event must have a positive significance or contribution to the country to be able to meet the four criteria, and an environmental disaster obviously is beyond those standards, Son told Tuoi Tre (Youth) newspaper.