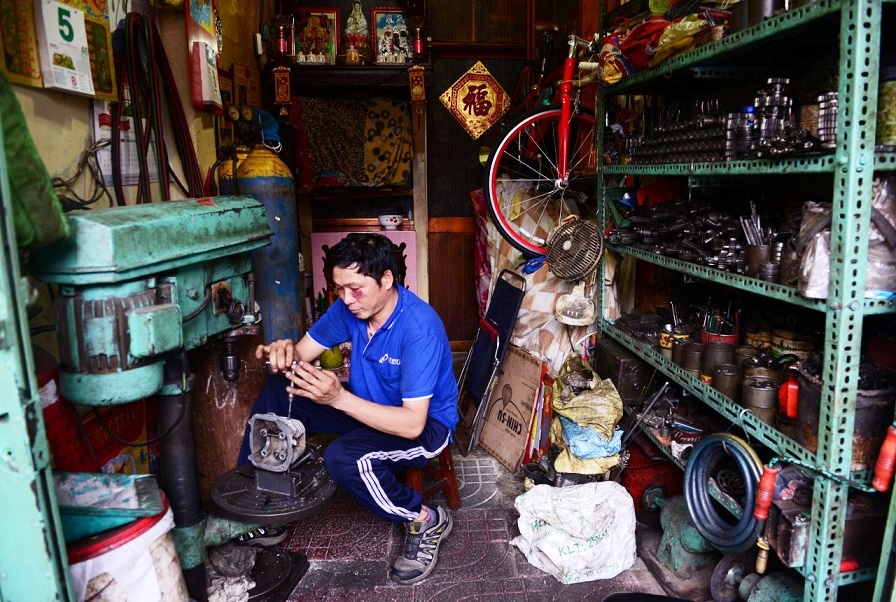 Authorities in Ho Chi Minh City have announced a plan to relocate 10,000 manufacturing facilities away from residential areas in a campaign to minimize pollution and ensure citizen safety.

The municipal People’s Committee has ordered the relocation over 10,000 manufacturing facilities during the 2016-20 period.

The facilities slated for the move are not situated within industrial parks, high-tech zones, processing zones, or industrial clusters, and pose a high risk of pollution, fire, and explosions in local neighborhoods.

According to Tuoi Tre (Youth) newspaper reporters’ observation in Binh Tan District, over 10 houses used for the production of dyes, glues, and plastic goods were crammed into a two kilometer section on Nguyen Dinh Kien Street.

Trucks making regular stops at these facilities to load and unload products force nearby residents to keep their doors and windows closed in order to avoid the accompanying noise and dust.

According to B.Q.T., a local citizen, the pollution caused by these facilities has been an aching problem for over two years, affecting the health of local people.

“We’ve expressed our complaints and asked local authorities to relocate these facilities several times, but no change has been made,” T. stated.

Dong Hung Thuan Ward in District 12 is also in a similar situation, with local officials being unable to move certain manufacturing headquarters for 15 years.

The decision to move manufacturing facilities from residential areas has sparked concern among many of the small scale businesses who will be affected by the relocation.

Le Thanh Phuong, owner of a six square meter mechanical workshop in District 11, stated that he did not know where he would conduct his operation once the plan is executed, adding that his workshop has been open for 30 years.

To Minh Hon, owner of a tailoring facility in the district, asserted that he would quit his job if the facility is relocated.

According to a representative of the People’s Committee in Binh Tan District, the relocation should first be applied to businesses operating on a larger scale and bringing about serious pollution and fire hazards.

Smaller facilities should only be moved following careful consideration and using a clear process, he added.

During the first phase of the plan, 22 facilities not suitable for the city’s urban planning will be relocated.

According to Saigon Agriculture Incorporation (SAGRI), which owns 16 of the centers subject to the move, the process is being delayed until the firm is able to finalize procedures for their new locations.

Nguyen Thanh My, deputy head of SAGRI's department of investment and development, called on local authorities to create favorable conditions for businesses to find new locations for their facilities.

The effort has been carried out for years, Hoang Minh Tri, deputy chief of the Ho Chi Minh City Institute for Development Studies, said, adding that there are still many limitations.

Businesses will face myriad challenges, including the high cost of resuming their operation at a new place, finding new homes for their employees, and training their new staffers, Tri elaborated.

“The facilities cannot be forced to move without proper policies from authorities,” the expert continued.

Local businesses should be supported with a reduction in taxes and ground rent, he said.