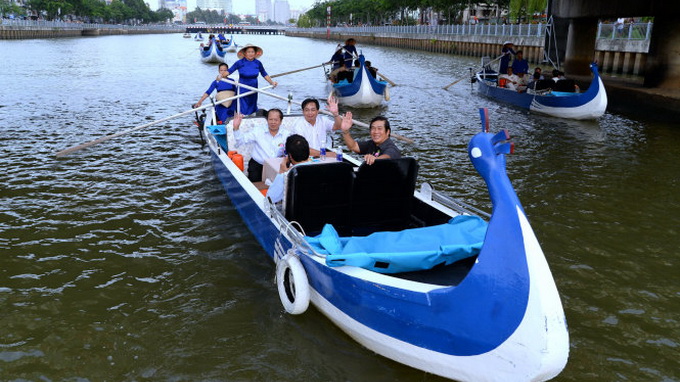 Incidents involving locals throwing rocks and bottles of urine at tourist gondolas traveling the city’s Nhieu Loc-Thi Nghe canal have been reported by the Department of Tourism, which added that the boats often gets caught in illegal fishing lines along the canal banks.

The most recently reported attack happened on the night of December 20, according to the Department, when locals fishing and drinking along the canal near the Bong Bridge chased the boat, hurling rocks and vulgar words at the victims on board.

The attackers then mounted motorbikes, following the boat for a few hundred meters before being cut off.

No tourists were hurt in the attack, though the gondolier had her leg injured and the Gondola’s canopy was torn by the rocks, the report said.

Meanwhile, the tourism authority of Ho Chi Minh City issued an official Code of Conduct on Thursday for the city’s visitors aimed at providing tourists with information on local social norms and etiquette during their visit.

The fan-folded handbooks are available in Vietnamese, English, Chinese, Korean, and Russian, and will be widely available at the airport, local hotels, tourist information desks, travel agencies, and diplomatic bodies.

The Code of Conduct was also made into a video set to be broadcast on TV, at the airport, on tourist buses, and at hotels.